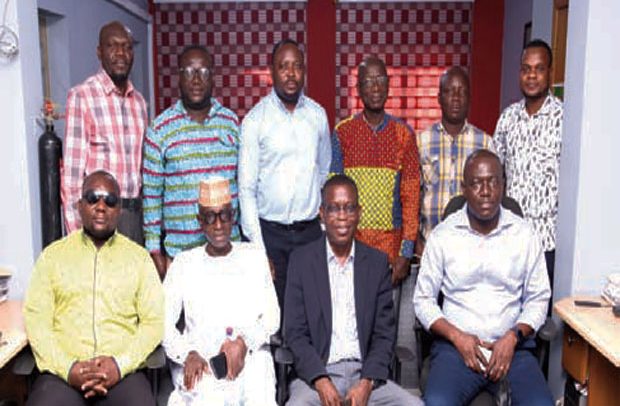 A Ghana Journalists Association (GJA) presidential aspirant, David Agbenu, last week landed at the newsroom to tell members of the association why they should vote for him to lead them.

David Agbenu is the Editor of the Ghanaian Times.

His plans to ensure that the association explores internally generated funds to undertake its projects is a novelty that would change the status of the body.

GJA, he observed, has depended on corporate donations for about 74 years of its existence. “It depends mainly on such donations to organise its annual awards ceremony,” he said, as he juxtaposed the association and the Ghana National Association of Teachers (GNAT) and other associations which depend on internally generated funds for their welfare. “GNAT has almost everything that can give them income. The latest is that they are building a bank. But journalists in Ghana don’t have anything of the sort except the press centre edifice.

“I will push for income generation activities if given the nod to be GJA President, and this will not be limited to Accra but across the country where chapters can also have their own press centres, through which they can also generate some income.”

Funding for such projects, he said, would come from funding agencies and NGOs who from time to time write to organisations to send in proposals for funding of their projects.

“We will engage project officers to write and send project proposals to organisations for funding for GJA-related projects. These projects will also generate funds for us,” he said.

On remuneration for journalists, he said “after going round the country to touch base with journalists, I came across a development that saddened me greatly. I found out that journalists were poorly paid.

“If given the nod, I will bargain with owners of media houses for appreciable salaries for our members.”

On unionisation, he said that it is important that the GJA unionises. This way, he said, the association would have a common front and be in tune with other international bodies.

He disclosed that the International Federation of Journalists (IFJ) for instance gave GJA three years to unionise. It took the association one year to get a certificate from TUC and has since not made any progress in that respect.

The GJA has not been able to unionise because most media houses belong to one union or the other, which goes against the requirements for the unionisation for GJA.

Such smaller unions cannot support journalists in difficult situations such as issues that concern the negotiation of their salaries, he said, adding “my duty, if given the nod, is to convince journalists to join the GJA and then come together to form one big union.”

He spoke about sporting activities between journalists in the private and public spheres as a means of building cordiality among them.

His office, when voted as President, he said, would work hard to have the association’s land litigation withdrawn from the court so an amicable solution can be found.

He promised to explore opportunities that would build the capacities of journalists.

Mr. Agbenu said that his tenure would concentrate on five pillars of unionisation, funding of GJA activities, the engagement of project officers, press centres across the country and capacity building and training of journalists across the country.