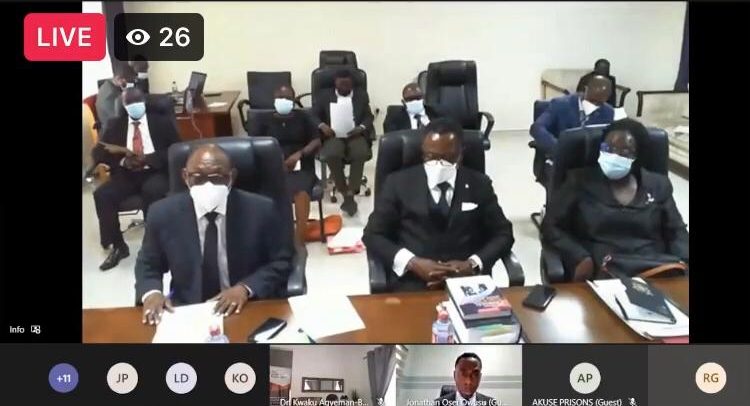 The Justice For All Programme (JFAP) yesterday made history when it held the first ever virtual court sitting to adjudicate the cases of some remand prisoners.

The programme which is usually done in prisons through makeshift courts was held virtually due to the challenges presented by the COVID-19 pandemic which has affected the transportation of prison inmates to courts.

The virtual court presided over by Justice Clemence Honyenuga, a Justice of the Supreme Court heard the cases of nine (9) inmates at the Akuse Prison out of which five (5) were granted bail, one bail application refused, another declined on ground of jurisdiction and two (2) other cases adjourned indefinitely due to various reasons.

The Justice for All Programme which is organised by the POS Foundation started in 2007 and it is aimed at easing prison overcrowding through setting up special in-prison court sittings to adjudicate cases of prisoners on remand.

Speaking at the opening ceremony of the first ever virtual court sitting, the Chief Justice Anin Yeboah in a speech read on his behalf by Justice Gabriel Pwamang, a Supreme Court judge commended the organisers of the programme while touching on the effect of the COVID-19 pandemic on justice delivery in the country.

“The beauty of life is that when we see challenges, we should confront them strategically and turn them into opportunities so that we can bring solutions for the benefit of society. The COVID-19 pandemic as we all know has hit the world severely and crippled many economies and systems. Ghana was not exempt from the impact of the pandemic and its criminal justice system also felt the effect of this scotch.”

The CJ expressed the Judicial Service’s gratefulness to court users, lawyers and other partners in the justice sector for their cooperation in keeping the administration of justice running.

“This is worth mentioning because freedom and justice, especially for marginalized and vulnerable in society is critical even in a pandemic.”

“As we witness the Justice For aAll Programme could not physically enter our prisons to sit over a year now since the outbreak of the Covid-19 pandemic, today, another intervention; Justice For all Virtual court sitting is being introduced to tackle the issue of overcrowded prisons from the angle of remand prisoners by sending what used to be the mobile court in prisons to the doorstep of prisoners through technology.”

Justice Anin Yeboah also disclosed that the JFAP is for the first time being funded by the government of Ghana and the Open Society Initiative for West Africa (OSIWA) contrary to what pertained previously where the programme was solely donor-funded.

“This is an effort to ensure that persons on prolonged pre trial detention can appear before a court with the help of technology to have their cases reviewed, such that the court can consider the grant of bail or discharge depending on the facts of each case or even determine the main case where the trial would not be long or a detainee voluntarily decides to plead guilty”, the Chief Justice noted.

He added that “The selection of the Justice For All Programme by the Paris Peace Forum as one of the top 10 global projects is worth mentioning as is the commendation by the United Nations Human Rights Council and also the fact that other African countries have studied the programme that we have put in place with a view to replicating it in their jurisdictions.”

The Attorney General, Godfred Yeboah Dame in an address indicated that the Justice For All Programme has established itself as a veritable mechanism for realising some of the fundamental principles of fair trial underpinning the criminal justice system and indeed the jurisprudence of this country.

“I find this Justice For All Programme positive and particularly impressive and a bold initiative. It represents a positive resolve to ensure that justice is not denied the underprivileged and the many remand prisoners around the country who ordinarily would not have had their cases heard by court of law especially in a COVID-19 era.”

“So today, a remand prisoner can be in the confines of where he is kept and still have his application for bail considered and granted by the court without the hustle of being moved about town to attend a hearing in a physical court. He leaves prison today to the comfort of his home after having his bail application heard and granted virtually. This is the truest expression for justice for all”, Mr. Dame added.

Justice Honyenuga who has been presiding over the proceedings disclosed that the Justice For All Programme has led to a reduction in the prison population from 33% in 2007 to 13% currently.

He said a total of 4,512 inmates as at January 2020 had appeared before court under the Justice For All Programme and out of this number 839 were discharged, 1,596 granted bail, 180 convicted and 28 referred to psychiatric hospitals.

Justice Honyenuga admonished investigators in Criminal cases to “be proactive in their work and not leave the vulnerable remand inmate to languish in jail for months and years under the cover of COVID-19. Justice for one in a remote village is justice for all.”