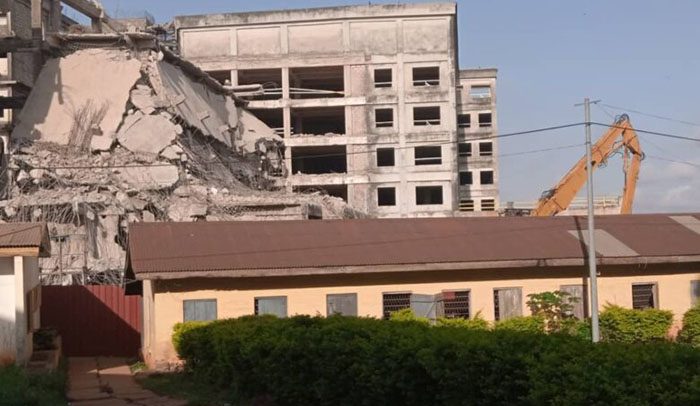 The structure being demolished

THE DEMOLITION exercise of the dilapidated Mother and Baby Unit (MBU) at the Komfo Anokye Teaching Hospital (KATH) in Kumasi has finally started.

Contractors, engaged by the government to complete the project, advised that the facility, which was left uncompleted some 40 years ago, should be demolished since it was weak and not fit for purpose.

President Akufo-Addo’s New Patriotic Party (NPP) administration, however, decided to intervene so that the huge building would be completed finally.

In fulfilment of his promise, the President, accompanied by the Asantehene Otumfuo Osei Tutu II, cut sod to complete the abandoned project.

At the time, President Akufo-Addo announced that his government had secured the funds needed to ensure the completion of the project.

Just after the sod-cutting, the contractors quickly moved to site to commence works but they detected some cracks in the abandoned building.

The contractors said the building’s pillars looked weak so the facility was not fit for purpose, suggesting it should be pulled down completely for the whole project to start afresh.

The demolition exercise would continue in the coming days and afterwards the monies raised by government to complete the old project, would be used to build a new MBU instead.