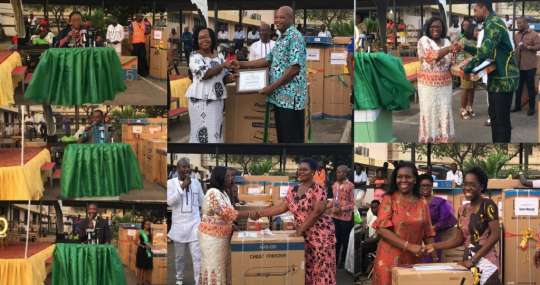 About 130 staff of the Korle-Bu Teaching Hospital (KBTH) have been recognized for their dedicated services.

The “best workers” each received a citation and varying gifts ranging from chest freezers, LED television, washing machines and double-door fridges at the awards ceremony held at the forecourt of the hospital to honour hardworking staff.

Deputy Minister for Health, Tina Naa Ayeley Mensah, in her remarks during the awards, said the role played by health workers in meeting the health needs of patients involved sacrifices that could not be adequately rewarded.

She noted that opportunities such as the awards to motivate staff to give their best were commendable.

The deputy minster however noted that staff motivation was not only through rewards but also in the general working conditions.

As such, she noted that government was working towards a number of projects in the 2020 budget to enhance the working environment of health workers.

Madam Mensah noted that one initiative the ministry introduced to motivate staff was the Vehicle Allocation Scheme to allow health staff to own brand new vehicles on hire purchase basis.

She however said the initiative has been confronted with challenges of non-payment by beneficiaries and therefore called on recipients to pay up outstanding debts so that other staff would stand a chance to benefit.

As such, he said they would continue to pursue their transformation agenda and make the hospital a centre of excellence for both local and international clients who desire to have access to a quality tertiary health facility.