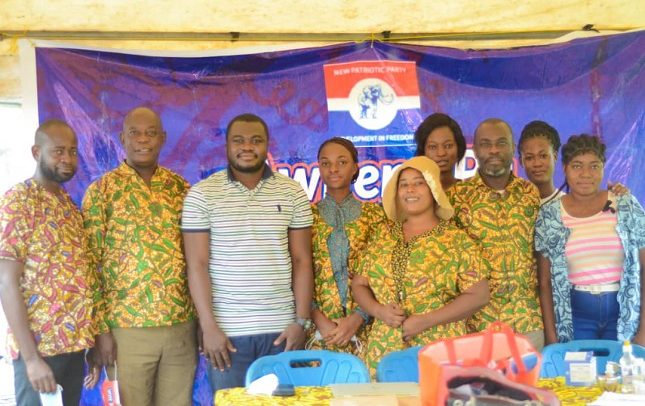 Charles Cobbinah (2nd left) with some members of the team

Charles Cobbinah, popularly called “Kempes” a Western Regional Secretary aspirant of the New Patriotic Party (NPP) says regular medical checkup should be part of the everyday lifestyle of people.
He stated this when he organized a free health screening exercise for NPP delegates who attended the Western Regional Delegates Conference of the NPP in Tarkwa.

He used the congress to give opportunity to party members to be screened for various health conditions, including blood pressure, and glucose content levels, hypertension and body mass index (BMI) among others.

The beneficiaries were also given free medicines including multivitamins, anti-malaria drugs and dewormers.

The occasion was also used to educate the women on breast cancer and the correct procedure for self-breast examination.

The initiative which was dubbed, “Ahwenepa Nkasa Medical Tent” was carried out in collaboration with members of the Kempes Health Campaign Team made up of health professionals, communication experts and philanthropists.

It was led by Dr. Papa Kwaw Miezah Yankey, Medical Officer and six nurses drawn from some health facilities in the Western Region.

Mr. Cobbinah said that although he has an interest in the upcoming NPP Regional Elections as Secretary aspirant, he has profound interest in the general good and welfare of fellow patriots.

Dr. Yankey revealed that about 45 per cent of those screened were diagnosed with various non-communicable disorders predominantly, hypertension and diabetes and were thus referred for further management.

He said those with immensely high Blood Pressures were directed to the various nearest health facilities for further management while others who were diagnosed of impaired glucose tolerance and diabetes mellitus, received counselling on diet therapy and compliance.

Anasthasia Ocran, Spokesperson of the Kempes Health Campaign Team said the exercise was to provide health support to people and let them know that Kempes has their health and wellbeing at heart.

Some of the beneficiaries expressed gratitude to the Regional Secretary aspirant and the “Ahwenepa Nkasa Medical Tent” for the initiative and the education given them on healthy lifestyles.