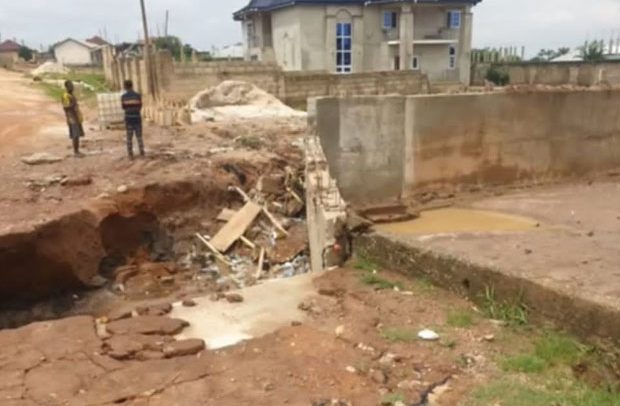 KUMASI MAYOR, Sam Pyne, has ordered for the immediate demolition of an unapproved structure at Duase in Kumasi to obviate floods.

The obstructing wall sits in a waterway having been constructed by an unknown developer, who is preparing to build a super structure in furtherance of a project.

Parts of the retaining wall, which had blocked the free flow of a river body, crumbled when it rained recently, sparking fears of an imminent disaster in the area.

A bridge, which is under construction, was also destroyed by the floods. Residents blamed the unapproved structure for causing the floods and destruction.

Sam Pyne, who led a delegation of the Kumasi Metropolitan Assembly (KMA) to visit the flood-prone area at Duase on Monday, said it was unacceptable for people to build in waterways.

“I have ordered for the demolition of one particular project, a retaining wall which is at Duase in a waterway without permit,” Sam Pyne said on Akoma FM.

He stated that the unapproved structure has also caused a bridge in the area to cave in, stressing that the structure would definitely be demolished.

“The developer has built a retaining wall which prevents the water from flowing and causing cracks in the bridge,” the KMA boss openly condemned the developer.

The KMA, he disclosed, has invited all house owners who have built houses on waterways at Duase for discussions before taking further action on them.

“The KMA Works Department will audit the structures first and know whether they have permit or not before we decide on them,” Sam Pyne pointed out.

According to him, the KMA would also audit all structures, built in flood-prone areas in the city henceforth and take the necessary action on them to avert disaster.

As part of efforts of preventing floods in Kumasi, he announced that the KMA has recently dredged river bodies at Asafo, Airport Roundabout and other areas.