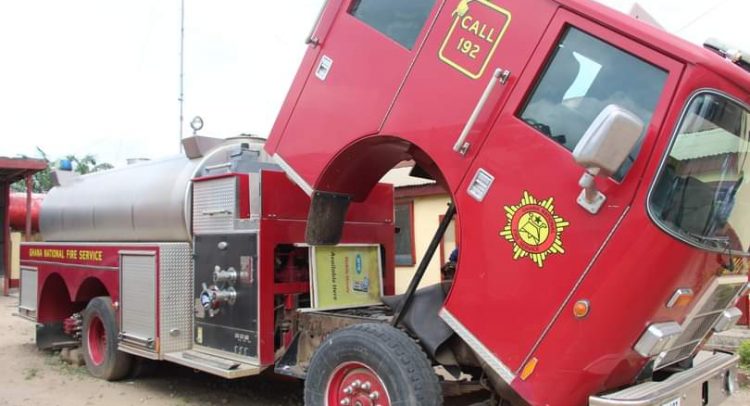 The broken down fire thunder

The Ghana National Fire Service (GNFS) in Koforidua, the Eastern Regional capital is appealing to government to aid them with new fire tenders.

The Station has been without a fire tender vehicle for the past two years, due to the broken down of the only fire tender and lack of funds to repair it.

The Management, as gathered only needs GHC20,000 to repair and service the broken down vehicle which has not been successful.

The situation has increased the risk vulnerability of lives and properties in the Regional capital as the fighting of a major fire outbreak remains a mirage.

Ayitey Brown Oquaye, New Juaben Municipal Fire Officer– who expressed worry about the situation, after a recent fire outbreak in Koforidua which got them to delay before storming the scene said they are forced to improvise with an old rickety fire tender but it malfunctions and frequently breaks down.

The scene of the incident was about five minutes’ drive from the Koforidua Fire station however firefighters from the station could not respond quickly due to the unavailability of an effective fire tender to extinguish the fire.
It took the intervention of a fire tender from the regional headquarters which arrived 40 minutes into the incident.

The victims directed their anger at the Fire Service for the slow response to their call despite its proximity to the scene of the fire incident.

Divisional Officer Ayitey Brown Oquaye, said even though the fire station is constraint logistically, the call came late; meanwhile, they have to fall on the Regional Headquarters for intervention since they do not have a functional fire tender.

The Fire Officer explained that “the fire tender is grounded for about two years now and ‘to hold ourselves readiness for emergencies the management brought us another tender to serve as an alternative tender, the only difficulty confronting the service is that that tender is not as strong as the old one we use to operate”.
We have made a lot of proactive efforts of contacting certain institutions to come to our aid at least we need about GHC20,000 plus to fix that tender, he said.

He said that ”I am told that the injectors and other components are defective that is the situation but we’ve written to other cooperate bodies to come to our aid but unfortunately the help is not forthcoming”.

He said the Koforidua Fire station ”is one of the sensitive fire stations looking at the proximity where it is sited and also I will be very grateful that cooperate bodies, institutions, banks must see the service as such and they should come to our aid”.

The Municipal Fire Officer appealed to corporate institutions in Koforidua to support the fire station to repair the broken down fire tender vehicle to help save lives and properties.