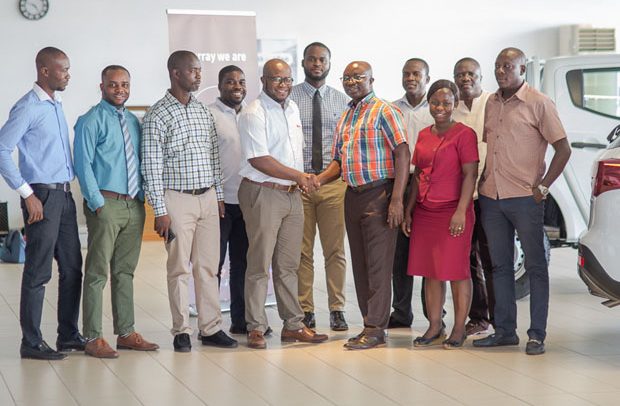 Osei Assibey in a pose with some workers of CFAO Motors

The Chief Executive of the Kumasi Metropolitan Assembly (KMA), Osei Assibey Antwi, has started visiting private companies in the city to get first-hand knowledge about their operations.

Osei Assibey commenced the visits at CFAO Motors at Adum on Thursday afternoon and officials of the private company were surprised to see the Kumasi Mayor.

Mr. Benson Oduro, the CFAO General Manager, led the Kumasi Mayor to tour the various units of the company.

Mr. Osei Assibey said that “I am here to familiarize myself with your operations and know your challenges.”

He said the Akufo-Addo administration is determined to promote private businesses in the country.

Mr. Osei Assibey said he would henceforth be visiting the private companies to see how best government can support them to thrive.

Benson Oduro showered praises on Osei Assibey for being the first Kumasi Mayor to visit the company.

According to him, the presence of the mayor would go a long way to help boost the morale of their workers.