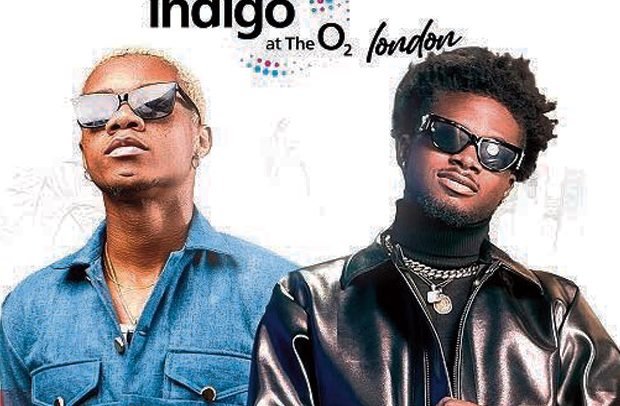 The much hyped event attracted a large number of music fans in UK, friends of the artistes, as well as some of the UK-based celebrities.

The well-attended concert witnessed energetic live performances from Kuami Eugene and KiDi, who performed their various hit songs, without breaks, to entertain fans.

The turnout for the event was impressive, given that it was their first shot in London at the Indigo O2.

The two Lynx Entertainment acts managed to fill the 5,000 capacity auditorium with fans and gave a great performance.

It was exciting to see the crowd’s reaction when the two acts unleashed some of their popular hit songs. KiDi performed most of his hit songs including his globally rated song, ‘Touch It’, while Kuami Eugene controlled the crowd with ‘Fire Fire’, among other songs.

The two acts who did what they know best gave away mind-blowing performances that left the audience wanting more.

Their performance was a blast; the songs they performed were all that was needed to make a statement about the quality of their songs.

Ghanaian hiphop artiste, Sarkodie, who was a surprise guest at the event, performed some of his hit songs which include ‘Adonai’ and ‘Happy Day’, which featured Kuami Eugene among others.

The performances of Sarkodie also made highlights, as a number of fans waved their hands to show appreciation to his stage performance.

The fans quickly turned the ‘Happy Day’ song into a freestyle piece and it was extremely brilliant.

There was some surprise performances from Nigeria’s Mayorkun, and Ghanaian afro dancehall artiste, Stonebwoy.

He proved why he deserves to be in the legendary list when he got the crowd going gaga with some indigenous highlife music.

He gave a good account of himself on stage. The sexy music star had a very strong stage presence and was cheered through his display.