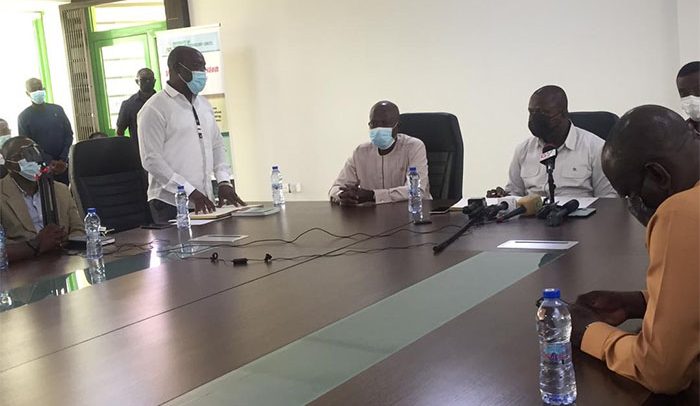 The Minister of Lands and Natural Resources, Samuel Abu Jinapor, has inspected some ongoing projects in Tarkwa.

Located at the University of Mines and Technology (UMaT), the projects are being funded by the Minerals Development Fund (MDF).

Mr. Jinapor inspected the projects on Tuesday morning, April 27, 2021, which was the second and final day of his two-day working tour of the Western Region.

The Lands Minister who was accompanied by officials of UMaT, the Western Regional Minister, Kwabena Otchere-Darko Mensah, officials of Minerals Commission and the Ministry, was informed that one of the building projects was 80% complete.

He seized the opportunity to enquire from the contractor whether or not MDF was indebted to them.

Prior to the inspection, the Lands and Natural Resources Minister held a brief meeting with officials UMaT to share President Nana Akufo-Addo’s vision for the mining sector with them and to also seek their collaboration in the fight against illegal mining popularly known as Galamsey.

According to Mr. Jinapor, UMaT was very important to the Government’s fight against Galamsey.

He stressed that the University is key, adding that “the collaboration exists between UMaT and Government.”

He noted that the ideas for sanitizing small scale mining ought to be generated from UMaT.

He reiterated that the new law enforcement regime against Galamsey will have no regard for political colourisation.