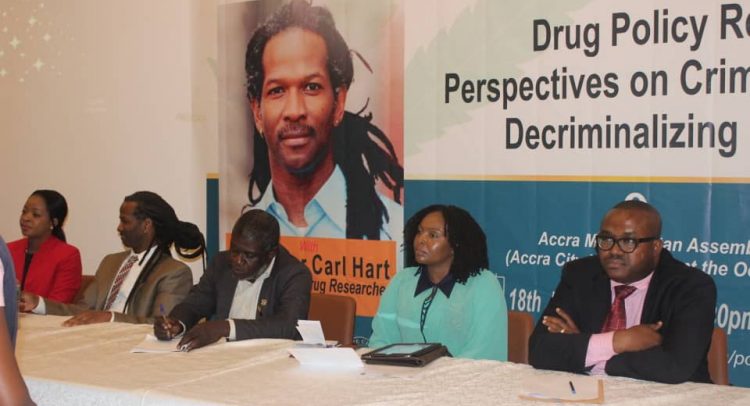 Stakeholders at a public lecture on drug policy reforms in Ghana have called for the decriminalization of the use of cannabis popularly known as ‘wee’.

According to them, the move by government would ensure the implementation of regulatory schemes that would enhance quality control of narcotics, generate jobs and tax revenue for the country.

There is currently a new Narcotics Control Commission Bill before Parliament which when passed would replace the existing Narcotics Drugs (Control, Enforcement and Sanctions) Law, PNDC 236, 1990.

Unfortunately, the Bill, as it exists, pays little attention to harm reduction, public health, welfare of users, prison population and alternative to incarceration.

Dr. Yaw Akrasi Sarpong, former Narcotics Control Board (NACOB) Executive Secretary speaking during the panel discussion of the lecture, said the current law on narcotics lacked a clear definition of whether narcotics qualifies to be classified as illegal.

“It just says the cannabis plant has various species and varieties and some of them can be used in manufacturing; so my understanding of the drug reform policy is that the definition ought to be specific,” he said.

He emphasized that decriminalization was the first step the country needed to take to reach legal regulation of the narcotics in Ghana.

Dr. Sarpong stressed that the country did not need to be “ready” before decriminalizing narcotics use.

According to him, just as the country gained independence when it did not have all the regulations or infrastructure needed to run an independent country, so also can narcotics be decriminalized without having all the regulatory mechanisms.

“Now that the bill is before Parliament, let all of us here as stakeholders start saying things about regulation and then we can all get together,” he appealed.

In his presentation themed: “Drug Policy Reforms; Perspectives on Criminal Justice and Decriminalizing Drug Use in Ghana,” Prof. Carl Hart, a professor of neuroscience and psychology, well known for his research in drug abuse and drug addiction, said myths surrounding cannabis use and the gains people stand to benefit from its criminalization have made it attractive to many governments.

Dispelling some of the known myths about cannabis used backed by research, Professor Hart said the use of cannabis does not lead to addiction, adding that most drug users are regular everyday people who go about their business and contribute to the development of society.

He added that for Ghana to reach the stage of legal regulation of cannabis which he recommended, it would require people having evidence and not anecdotes as well as better education and implementation of psychopharmacology.

In his remarks, Seth Kwame Acheampong, Chair of the Parliamentary Select Committee on Defence and Interior, said it was refreshing to hear scientists speak on important societal matters like narcotics regulation, adding that it was the way to go if government was to find solutions and help the society grow