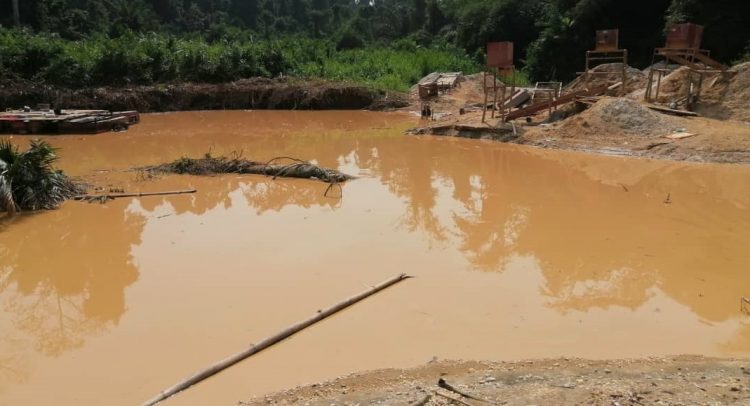 If nobody understood the President when he pronounced that he was ready to put his presidency on the line in his fight against galamsey, at least I did and still do. What he said in the run-up to the 2020 general election meant that if even Ghanaian voters would vote against his government for fighting the galamsey menace, so be it.

During the electioneering campaign, all those who were involved in galamsey in almost all the gold producing areas threatened to vote against the President if he failed to stop the fight against the menace. The President stood on his grounds and accelerated the fight even in the face of some members of the Taskforce charged to check galamsey going wayward and allegedly colluding with galamseyers for their own parochial interest. At a point in time, the President had to dissolve the Taskforce when report reached him that some members of the Taskforce were corrupt.

Then Election Day, the day of reckoning came knocking on our doors and the illegal miners prepared their voter ID cards to pay the President in his own coin. The President and in fact, Ghanaians were not surprised when the illegal miners in the gold mining areas voted massively against the President and his party. Almost all NPP parliamentary candidates in the gold mining areas lost their seats. It was a matter of ‘you do me, I do you’.

What is consoling is that the majority of Ghanaians who are not involved in galamsey voted for the President. It therefore, stands to reason that, whereas the President boldly put his presidency on the line, he came out successful since majority of Ghanaians supported his effort. It takes a courageous man to make such bold statement, and the President will go down in history as a man who dared the devil in his attempt to save our environment. During the electioneering campaign, the NDC seized the opportunity to criss-cross the mining communities to preach hate against the President’s effort to fight galamsey and promised the galamseyers that when voted into power, an NDC government will give them a leeway to operate freely. They even said the President was insensitive to the plight of the illegal miners and that in the face of unacceptable unemployment in the country, no sensible person will kick against galamsey which provides jobs for the teeming youth.

I happened to attend a funeral in one of the galamsey operating areas where I saw dye in the wool supporters of the NPP, including a constituency secretary who was also involved in galamsey operation, opening campaigning against Nana Akufo-Addo. This shameless secretary was speaking through a megaphone, calling on his listeners to come out in their numbers on Election Day to vote against Nana Akufo-Addo. The President had enemies within and without in his attempt to save our river bodies and the environment as a whole. This world, my brother!

But now that the chickens have come home to roost what should the President and well-meaning Ghanaians do as far as the fight against illegal mining is concerned? Should we resign ourselves to fate? Should we look the other way as these nation wreckers continue with their illegal operations?  Should we succumb to pressure from a few businessmen who gain from the operation of illegal miners? The answer is a big NO because posterity and children yet unborn will never forgive us if we allow the environment which we collectively hold in trust for them to be destroyed by some few greedy and irresponsible illegal miners.

We are a country awakened to danger and called to collectively defend the environment and our river bodies.  Our failure to rein in these social misfits has now turned to anger and anger has turned to resolution. The time has come for us to use all means available to tackle this menace. We are joined in a great cause, our resolution to fight together to uncoil ourselves from the grip of these criminals as they are bent on defying orders and openly ignoring all cautions. What all Ghanaians must come to realize is that these criminals operate not only to make money but also to disrupt and end our way of life if not our survival since water is life.  By abandoning every value except the will to get rich quick, these misfits are standing on our way, even in the face of global climate change.  That is why we cannot afford to fail in this fight.

So, now that even the military which we respect so much for their ability to drum sense into the minds of these galamseyers have seriously betrayed the cause, what should we do next?  I have a Plan “B” for the President to follow. Let us form a new Taskforce made up of 1.  All chiefs and adikrofo in mining areas. 2. All Assembly members in all mining areas. 3. All Unit Committee members in all mining areas. 4. The leadership of churches and mosques in mining areas. These groups should be charged by the President to take matters in their own hands and wage the war against galamseyers.

Forget about the large number of the Taskforce because bitter medicine is prescribed for the cure for inveterate diseases. All district assemblies should be charged to provide logistics and allowances for the Taskforce. One of the chiefs, preferably a paramount chief, should be chosen as the chairman of the Taskforce. The reason is that, because the chiefs are the custodians of the land and also hold the land in trust for their subjects, they will stand accused before their people if they fail to help curb the menace. In fact, chiefs who sell land to these criminals will feel reluctant to do so if they are made members of the Taskforce.

If the President is able to hold the bull by the horns, close his ears to the unnecessary and cacophonous noises of the NDC and eventually succeed in this herculean task, Ghanaians will come to realize the importance of saving the environment and any politician who will use galamsey to campaign for votes in 2024 will be hooted at.  Because people live along the banks of the polluted rivers, they will come to realize that the fight to check the pollution of the river bodies is not for the benefit of the President and his party,  but for them who use the river for their daily activities and for generations yet unborn.