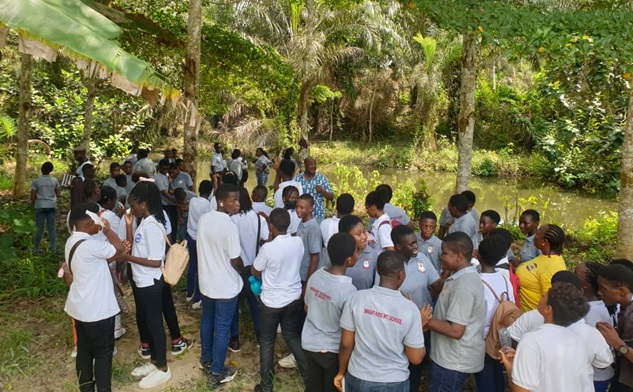 Some students who toured the farm recently

LOCAL TOURISTS who visited B-BOVID Farms recently at Angu in the Shama District of Western Region, have commended Issa Ouedraogo, the entrepreneur, for charting a new agriculture module on his farm.

The tourists believe the government must work with the entrepreneur to expand the scope of his business and ideas to benefit more Ghanaians.

Edward Tei Sarpong, Coordinator of Good Governance Africa, a non-governmental organisation operating in the Western Region, expressed satisfaction about the impact of the new module of agriculture being used by the entrepreneur, when he led over a hundred school pupils to B-BOVID Farms.

According to him, such socially-inclusive module of farming, would keep the farmers active, proactive, and productive.

“What we have been doing with B-BOVID in the last seven years is to introduce people to his new concept of farming geared towards training farmers on sustainable agriculture,” he said explaining that the reason for the NGO marrying governance with tourism and farming, was to promote agriculture.

“It is an aspect of our lives that borders on our existence and sustenance,” he said.

He further commented, “This is a Ghanaian who grew up as an orphan, God being so good to him, he had been able to educate himself and created good jobs.

Kwame Frazier, another visitor to the B-BOVID Farms, also praised the entrepreneur for setting up an ICT centre for farmers, a mechanisation centre, an alternative livelihood centre, and a factory.

Aside that, he said the entrepreneur had created a 15-acre ecological biodiversity garden and set up 3 big dams to demonstrate climate-smart agricultural technology for farming.

The visitors appealed to the government to support his activities and create more such entrepreneurs.