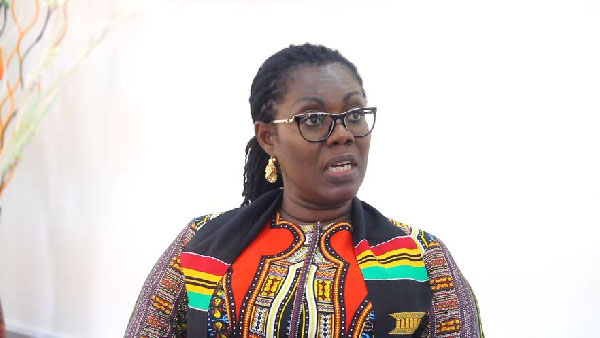 MINISTER OF Communications and Digitalisation, Ursula Owusu-Ekuful, has asked National Democratic Congress (NDC) lawmakers to pipe down on their criticism of the government for not issuing Ghana Cards to every citizen, asserting that they are partly to be blamed.

According to her, the opposition NDC and their MPs waged a nationwide campaign against the registration exercise, by urging their members and Ghanaians to boycott it, explaining that this also accounted for the number of the citizens without the Ghana Card.

The government, in 2017, introduced electronic chip-based national identification known as Ghana Card to be the primary identification document for the country.

The opposition NDC politicians, according to Mrs. Owusu-Ekuful, sabotaged the registration, while decrying the exclusion of voters’ cards as registration documents.

The Minister for Communications told Parliament yesterday that, “It is absolutely imperative we be factual as Members of this House when we are making our statements because this is a House of records.”

“Yes, you were opposed to the Ghana Card registration exercise. You urged Ghanaians and your members to boycott the exercise. Some of them did and the result is that they do not have the Ghana Card today to complete this national exercise.

“If some blame needs to be assigned, you are part of the blame for going down that path which unfortunately is causing certain Ghanaians some discomfort,” she noted.

The minister was responding to accusation by the Ranking Member of the Communications Committee, Alhassan Bashir Alhassan Fuseini, that she was implementing a bad policy by deactivating unregistered SIM cards.

The Ministry of Communications and Digitalisation had warned that all unregistered SIM cards would be deactivated at the end of November, an extension to the previously announced deadline of the end of October.

All SIM cards which have completed the first stage of the registration exercise but not the second phase are being blocked from accessing data services after the deadline, and these are due for complete deactivation.

The minister said, “Now, what we need to do is to see how we will work together to facilitate the acquisition of the card so that this exercise will be completed or make alternative arrangements for this exercise to be completed.”

She pointed out that the NDC, led by its General Secretary, issued a public statement, urging Ghanaians to boycott the Ghana Card registration exercise.

“Are you not NDC MPs; are you denying your own party position now? If you repent of that position, say so and let Ghanaians know that, that the position you took three, four years ago, you have now come back to full circle,” she chided.

She continued, “On the floor of this House, they also indicated that they were not going to participate in the Ghana Card registration, including Muntaka. They said they were all doctored cards.”

The minister added that when the National Identification Authority came to set up in Parliament to register MPs, the NDC parliamentarians refused to take part.

Majority Chief Whip, Frank Annoh-Dompreh, also corroborated the minister’s account, saying, “I read in the media of news attributable to your side that you were against the registration of the Ghana Card. Speaker, for my colleague to say that the minister has implemented bad policy, he is forgetting that we passed the law.”

He added, “It was not a single action by the minister. Continuously, the ministry kept giving information to the public on deadlines. You should have also supported the campaign and this is what the minister is saying.”

“We should all be patriotic; you should have shown true patriotism by telling the Ghanaian people to participate in the national exercise. You failed to do that. Today, you are crying and throwing your hands up. You failed to be patriotic,” he scorned.