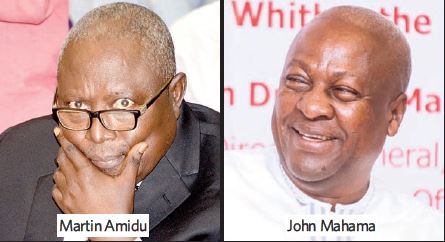 He called Mr. Amidu’s action ‘stupid’ and said he (Amidu) was a ‘coward’ and also dared the SP to prosecute him if he was man enough.

Mr. Mahama’s attack stemmed from a corruption and anti corruption assessment into the recent Agyapa deal relating to the Gold Royalties Monetization Transaction under the Minerals Income Investment Act 2018 (Act 978), which has now been put on hold by President Akufo-Addo until the next Parliament, released by Mr. Amidu where he talked about some of the ongoing investigations his office was undertaking, including the infamous Airbus saga.

According to Mr. Amidu, he is tarrying in his investigation because of the impending general election since Mr. Mahama has taken what he called political ‘insurance’ by picking forms to contest as the NDC flag bearer; and gave an indication that after the electoral process, he would go after all those involved in the Airbus scandal.

Mr. Mahama was incensed by Mr. Amidu’s report when he told NDC supporters in Accra on Tuesday that the SP was a ‘coward’.

He added “if you were man enough, present Agyapa and do a report on Airbus separately, and then come as a man…if you think that I am indicted on Airbus, accuse me directly.”

The former President said, “But because he was a coward and they knew that Agyapa was going to be discussed today, they put a paragraph on the Airbus to equalize the discussion.  I mean what stupidity is this?”

He continued, “You are investigating Agyapa, present a report on Agyapa , because you know Agyapa is going to be discussed, you have indicted the President’s cousin as Finance Minister and you are afraid that you are presenting only a report on Agyapa so in the Agyapa report you put some other report that balance the equation. I thought he was man enough.

“Come out! The point is, you see I am the leader of a political party, I say if you have the legal basis for investigating me, go ahead and investigate me. There has being a DPA (deferred provocation agreement) you are not a party to. You don’t know who are involved in it. They have identified some people in it. You do not have an authenticated agreement from SFO or whoever is involved in it and you say ‘I surmised’ that Government Official 1 is sosososos, somebody somebody is sosososo(sic)…On what legal basis are you proceeding?”