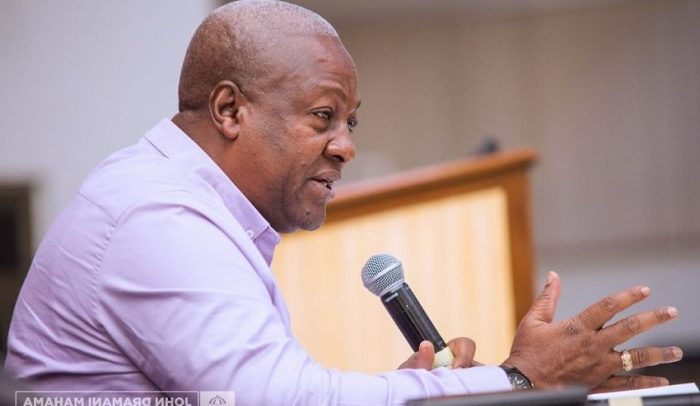 Former President John Dramani Mahama under whose era, an Unemployment Graduate Association was formed due to freeze in hiring into the Public Sector as part of the International Monetary Fund Conditions imposed on Ghana has jabbed the Akufo-Addo government over the same condition by saying the decision will make the situation dire for graduates in the country.

Mr. Mahama’s reaction follows the announcement by the Finance Minister in the 2023 budget, on the freeze of hiring into public sector, which in his view, the government took this decision as a result of reckless spending and mismanagement of the economy.

Addressing the 13th Congregation of the Accra Business School on Saturday, Mr. Mahama said “Unfortunately, parastatals that were thriving a few years ago have been run into the ground by political appointees who have mismanaged the affairs of the state-owned enterprises. These constraints further the ability of the public sector to employ.

“Let me put our situation in a better context. Compensation cost for 2022 was estimated at 55.3 percent of tax revenue, which means of all the taxes we collect we spend 55.3 percent to pay wages and salaries for the public sector alone, amortisation and interest payments consumed the rest of our taxes,” the former president said.

He added the “situation has compelled the government this year to announce a freeze or a ban on public-sector employment. This makes the situation rather dire for you…unfortunately due to mismanagement and reckless expenditure by the government over the last five years, the private business environment is also in a very poor state today.”

On Budget cut for the appointees, Mr. Mahama said the failure of President Akufo-Addo to reduce the size of his government, is having a toll on the economy.

He asked the President to reduce the number of his appointees to help bring down government expenditure to alleviate the hardships Ghanaians are faced with.

According to him, government’s directive on the use of V8s and V6s by appointees is untenable, arguing that it will be difficult for the government to monitor the movement of his appointees.

He questioned the modalities that will be used by the government to track appointees who drive V8s in Accra and its surroundings.

Mr. Mahama charged the government to put in proper measures to cut down on expenditure that has crippled the economy.

“Unfortunately, in this budget, Ghanaians are slapped with stiff additional taxes and no tangible cuts in expenditure. They just say don’t travel with your V8s. If you are travelling outside Accra, you can use your V8, but don’t use it in town. I mean, who’s going to monitor if you use your V8 or not? Expenditure has increased significantly by GHC80 billion. It appears we have to accept to live with the excessive bloated size of government at the presidency,” the former President said.

Accordingly, all government institutions should submit a travel plan for the year 2023 by mid-December of all expected travels to the Chief of Staff.