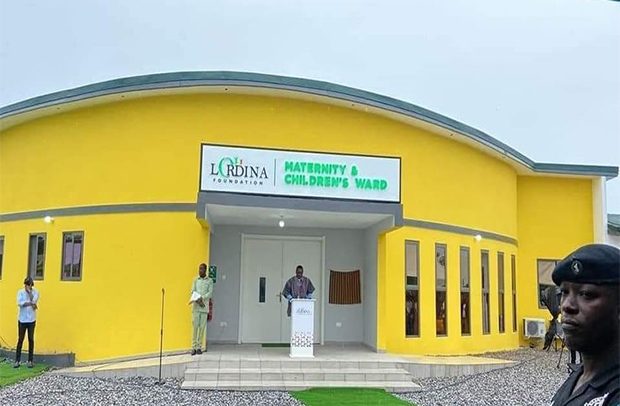 The front view for the facility

Former President, John Dramani Mahama and his wife, Lordina Mahama, have commissioned a Maternity and Children’s Ward at the Bole hospital in the Savannah region.

The 40-bed facility has a neonatal care unit, 3 incubators, 5 phototherapy units, a kangaroo mother and child care center, a delivery room, a recovery ward, a theater and accessories, a sterilization room, a doctors’ consultancy room, and nurses’ work station among others.

The commission of the project through the Lordina Foundation is in celebration of the couple’s 30th marriage anniversary.

At the commissioning of the project, former President John Dramani Mahama said they decided to give back to the people of Bole where he was brought up.

“ Today we commemorate our 30th wedding anniversary and thank God for giving us the strength to fulfill our pledge that we made to him. Considering what God has done in our lives we pledged to give out something that could cost us personally to him.”

According to him, it became necessary to support the expansion of the Bole hospital to cater to the needs of the people due to the increase in population in the district.

He indicated that the early growth and well-being of children are linked to the mother adding that addressing issues of maternal and child mortality is important.

He added that to ensure that mother and child come out safely, a well-equipped facility is necessary.

Mr. Mahama was hopeful that the facility will be put to immediate use for the benefit of mothers and children in the Bole area.

“ The Maternity and Children’s Ward is not just a benefit for the patients who will be admitted here, it will also provide a comfortable environment for the nurses at the maternity ward because health workers also deserve a sound working environment.”

He appealed to the management of the hospital to ensure that they take good care of the facility so that it will benefit the residents.

The Bolewura Sarfo Kutuge Feso I, thanked former President John and his wife for building the Maternity and Children’s Ward for the Bole hospital adding that the facility will ease the pressure on women during childbirth in the hospital.

“What our wife has done is unprecedented because she could have sent this project to Nkoranza where she comes from but she decided to bring it to Bole her husband’s hometown and we appreciate it a lot.”

He, however, appealed to the former president and his wife to help build a mortuary at the Bole hospital noting that the hospital has been without a mortuary since 2016.

The Bolewura enskinned Mrs. Mahama as the Queen-mother of health in the Bole Traditional Area.