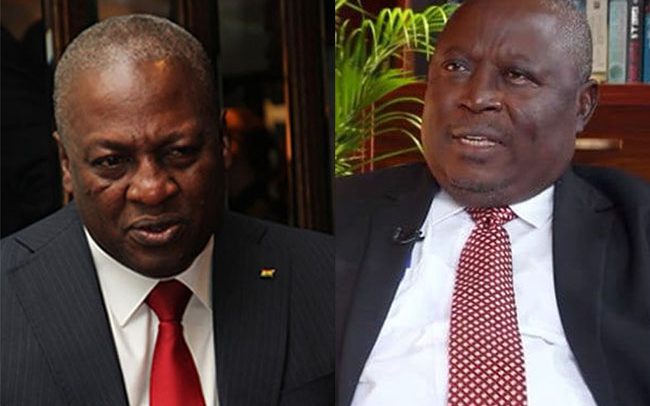 IN THE opinion of ex-President John Mahama, the Special Prosecutor (SP), Martin Amidu’s days as a member of the National Democratic Congress (NDC) are numbered.

The former Ghana leader has openly stated that he doubts if Mr. Amidu, who has been a known NDC member since the party was formed, is still part of the opposition party.

“Mr. Amidu used to be a senior member of the NDC but I don’t know if he still is,” Mr. Mahama said during an interview with Abusua FM.

Mr. Amidu, a top member of the NDC, was appointed as the SP by President Akufo-Addo to help deal with corruption in the country.

His appointment was met with massive resistance by most of the NDC gurus, who clearly feared that Mr. Amidu was being appointed to witch-hunt them unnecessarily.

Recently, there have been frosty relations between Mr. Amidu and former President Mahama.

Mr. Amidu last week in the Agyapa Report confirmed that Mr. Mahama was the Government Official 1 mentioned in the global Airbus scandal as having taken bribes in millions of Euros and the latter descended heavily on the SP.

No Beef With Amidu

He then pointed out that he and the SP even had so many things in common.

“Mr. Amidu is a northerner just like me, and he used to be a senior member of the NDC, I don’t know if he still is,” the NDC Presidential Candidate said live on radio.

Mr. Mahama said he had realized that Mr. Amidu’s office as the SP was facing so many “constraints”, which is of great worry to him (Mahama) as a Ghanaian.

“Mr. Amidu is suffering from interference in his work as the SP, and I said it sometime ago but it seemed Mr. Amidu was not pleased with my observation,” he said.

He said “Charles Bissiu’s case is a clear example that Mr. Amidu’s work as SP is suffering from political interference from the sitting NPP government,” he claimed, adding, “You see, Mr. Amidu was investigating Mr. Bissiu and they quickly told the CID to investigate and clear Mr. Bissue from any wrongdoing. This is uncalled for.”

“I am asking, why should the SP and the CID do paralleled investigations at the same time?” he asked, stressing that Mr. Amidu was not being allowed to work.