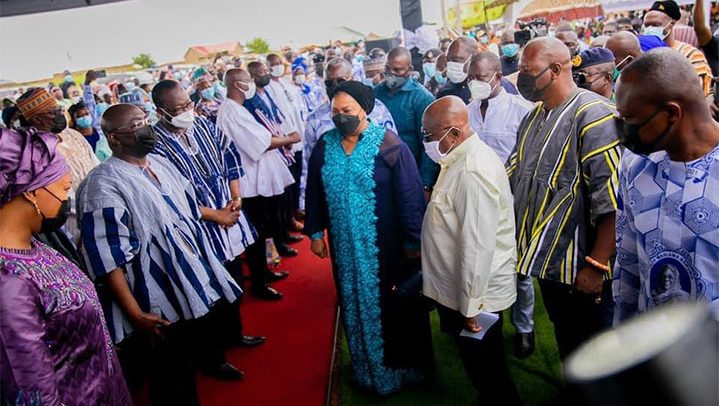 President Akufo-Addo paying his respect at the funeral

President Akufo-Addo yesterday stormed the Kperiga School Park in Walewale in the North East Region to commiserate with his deputy, Dr. Mahamudu Bawumia during the final funeral of the Vice President’s late mother Hajia Mariama Bawumia.

Scores of people from all the political divide were in Walewale to mourn with the Vice President and his family.

On Saturday, the ethnic groups in the northern part of the country took over Walewale with their respective rich cultural displays, and on Sunday the Akans, Ewes, Gas and allied tribes from the southern Ghana took over the stage with their splendid displays to reiterate the country’s cultural diversity.

Second Lady Hajia Samira Bawumia took the centre stage when she was captured performing the needed rites, including cooking for her guests as part of the rich Mamprusi culture.

President Akufo-Addo, in his address, described the late Hajia Mariama Bawumia as a woman of unfailing courtesy and always made sure colleagues of her son were welcomed in her home. 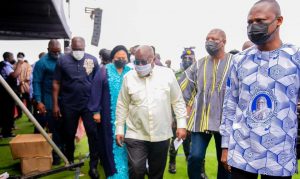 He stated that Hajia Mariama was a remarkable and devoted wife of one of the most prominent statemen of his era and one of the leading spirit of the formation of Northern People’s Party, the late Alhaji Mumuni Bawumia.

“She was also the mother of the man generally acknowledged the most outstanding Vice President of the Fourth Republic, Alhaji Dr. Mahamudu Bawumia.”

President Akufo-Addo thanked the late Hajia Mariama Bawumia for her services to her family, community and nation, and said “May her soul rest in perfect peace in the bosom of the Almighty until the last day of the resurrection that we shall all meet again. Amen.”

One of the powerful tributes was delivered by the Asantehene Otumfuo Osei Tutu II.

The glowing tribute, which the Otumfuo personally signed, described Hajia Mariama Bawumia as a matriarch, and also eulogised the Bawumias for the immense impact the family has made on Ghanaian politics, which the Asantehene said, will be felt for generations.

“As we idolise and eulogise great men and great leaders, we so often fail to acknowledge the role of the faithful woman behind the mounding of their mettle. But truly it is that behind every great man is the hand and the heart of a faithful and devoted woman. And to a few women that goes even greater honour of becoming the matriarch from whose impact on Ghanaian politics will be felt for generations. On that roll of honour belongs Hajia Mariama Bawumia,” the Asantehene stated.

“She not only was the steady heart behind one of the titans of politics in the North during the most tumultuous periods of Ghana’s history, her guidance and tutelage has produced a family whose impact on Ghanaian politics will be felt for generations,” he said.

Narrowing his gaze on the Vice President, Otumfuo Osei Tutu II praised the late Hajia Mariama Bawumia for “her guidance and tutelage which produced a son who today occupies the second highest position in the land, Dr. Mahamudu Bawumia, Vice President of the Republic,” and expressed sadness that Hajia Mariama Bawumia won’t be around to see what the future holds for Dr. Bawumia.

“How sad that she will not be around to see what the future holds for her son, but indeed the matriarch can depart in response to the call of her maker creator in the knowledge that she has impacted upon her nation as few ever would in their lives and above all, that the nation will continue to enjoy the fruits of her endeavours for many generations to come.”

Yakubu Bawumia, the youngest son of the late Hajia Mariama Bawumia, who read a tribute on behalf of the children, said their mother was very kind at heart and had a good sense of humour, noting that she got very well with many people.

“Maame we love you so much and we will miss you forever. Please continue to look over us,” he said.

General Secretary of the New Patriotic Party, John Boadu, said the late Hajia Mariama Bawumia was a motherly figure and a great source of inspiration and gave wise counsel to the party, particularly in the five regions of the North.

“Undoubtedly Hajia Mariama’s greatest contribution to the New Patriotic Party is the golden gift of her son, Alhaji Dr. Mahamudu Bawumia who is the Vice President of the Republic, having significantly led the party to clinch two successive electoral victories as the party’s Vice Presidential candidate in the general elections of 2016 and 2020.”

Hajia Mariama passed away peacefully on September 13, 2021 in Accra.

The late Hajia Mariama Bawumia was born on September 15, 1939 and died at the age of 82 years.

She has since been buried at the same spot with her husband the late Mumuni Bawumia at Walewale.

Hundreds of mourners from across the country trooped to the final funeral grounds of Hajia Mariama Bawumia in Walewale to commiserate with the family.

Chiefs from the Northern part of Ghana and across the country also graced the final funeral of the late Mariama Bawumia.