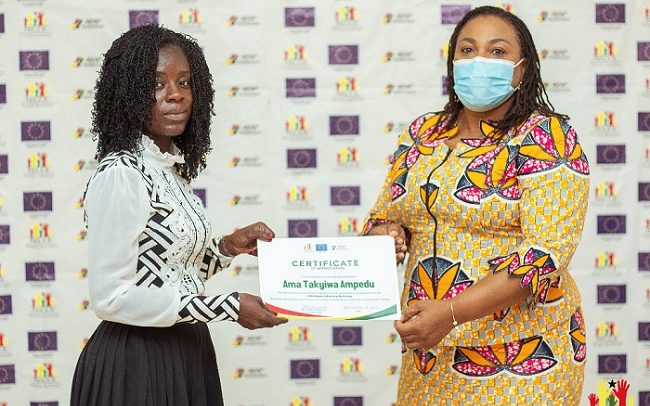 NCCE Boss presents a participation certificate to a journalist

The Executive Director of Media Foundation for West Africa, Sulemana Braimah,       in his analysis of the recently launched manifestoes of the two main political parties, has concluded that both failed to comprehensively tackle issues of environmental governance.

He noted that despite the mention of the word “environment” 12 times by the New Patriotic Party (NPP) and 18 times by the National Democratic Congress (NDC) in their documents, the contexts had nothing to do with tackling environmental issues such as climate change.

Mr. Braimah, who was speaking to some journalist at a media advocacy workshop in Accra on Tuesday, said the media with its agenda setting prowess could still make issues of environment take centre stage in national discourse since they had the propensity of affecting all government policies.

“You can talk about planting for food and jobs, one village one dam, which are great initiatives, but if the rainfall pattern keeps changing, how are we going to plant, feed our people and export; and also what kind of dams are we going to construct?” He asked.

The workshop which was organized by the National Commission for Civic Education (NCCE) with funding from the European Union (EU) was held under the theme “Effective Publication on Environmental Governance and Amendment of Relevant Constitutional Provisions in Relation to Anti-Corruption Laws: The Role of the Media”.

A legal practitioner, Samson Lardy Anyenini, said the issue of corruption in environmental governance was deeply rooted in how the constitution was framed where issues of environment were scanty.

Issues on environmental protection can be found in Article 41 of the constitution, which requires every citizen “to protect and safeguard the environment.”

“In our whole constitution, we have only one phrase on the protection of the environment, and of course we have subsidiary legislations. But how far have we come with implementation of those legislations?” He queried.

The media, he said, was a “natural constitutional partner” of the NCCE to be free and uphold principles of the constitution.

He for that matter urged journalists to not self-censor themselves in addressing issues that hinged on environmental protection and protection of human rights.

The chairperson of the commission, Josephine Nkrumah, said that poor environmental governance which was as a result of corruption, lack of public accountability as well as poor policy formulation and enforcement had contributed to the devastating effect of climate change worldwide.

“An informed citizenry must play an active role in confronting this phenomenon and bring sanity to the environmental governance space,” she said.