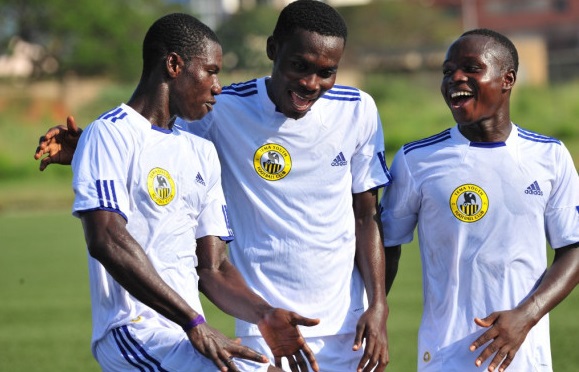 FLASHBACK: Moses Odjer with some of his play mates

Tema Youth SC went 17 matches unbeaten in the 2010/11 Poly Tank Division One League en route to Premier League qualification, is one of the most memorable seasons for the harbor boys.

The star-studded side bulldozed their way past every single ‘obstacle’ on their way to a deserved qualification under the tutelage of Tony Lokko.

A resounding 4-1 thrashing of D’International at the Essipong Stadium confirmed their Premiership status.

According to the bank roller of Tema Youth SC, Winfred Osei Kwaku Palmer, the 2010/11 squad happened to be his best Tema Youth team ever, as seen in their progress outside the team.

Nine of his players by then were playing for the national teams, with the likes of goalkeeper Kofi Mensah, Derrick Mensah, Thomas Partey, Francis Narh, Moses Odjer, Charles Ankapong, Jeremiah Akorful among other such players.

Tema Youth presented the youngest squad for the 2011/2012 Glo Premier League with only three players crossing the 23 years bracket.