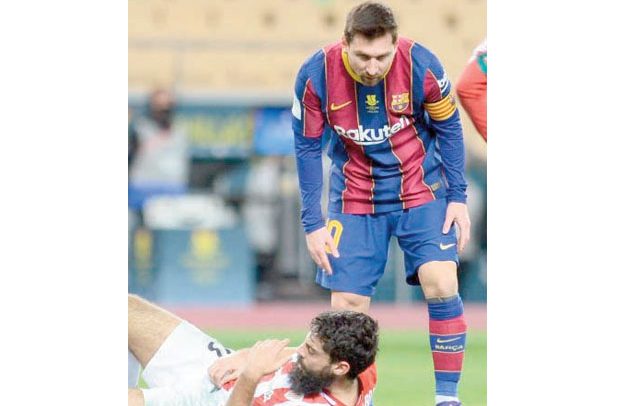 Messi (R) could be banned for up to four games

Lionel Messi could be banned for up to four games after receiving the first red card of his Barcelona career in Sunday’s Spanish Supercopa final 3-2 defeat to Athletic Bilbao.

Two goals from Antoine Griezmann looked to have Barca on course for the first trophy of the Ronald Koeman era, but Asier Villalibre’s 90th-minute goal took the game to extra time.

Inaki Williams gave Athletic, who beat Real Madrid in the semifinal, the lead in the 94th minute and with time running out and Barca down 3-2, Messi was sent off for lashing out at Villalibre in frustration.

The Royal Spanish Football Federation’s competition committee will meet this week to decide the length of the Barca captain’s suspension.

Messi, 33, is certain to miss two matches but that could be doubled, depending on how the competition committee categorizes the dismissal. The ban will be served across La Liga and the Copa del Rey.

Therefore, he will miss Thursday’s Copa trip to third-division side, Cornella, and next weekend’s game against Elche in La Liga. If the ban is longer, he could also miss the next round of the Copa if Barca progress and the match against Athletic at Camp Nou on Jan. 31.

Sunday’s red card was the first Messi had received while playing for Barca’s first team, a length of 753 matches. It was the fourth of his career, though, following a dismissal for Barca B in 2005 and two with Argentina, including one on his international debut that same year.

Koeman said after Sunday’s loss that he empathized with Messi’s frustration.

“I can understand what Messi did,” Koeman said. “I don’t know how many times they fouled him, and it’s normal to react when they keep trying to foul you as a player who is looking to dribble with the ball, but I need to see it again properly,” he added.