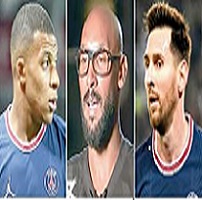 Kylian Mbappe is Paris Saint-Germain‘s No 1 attacker and Lionel Messi needs to show the young Frenchman more respect, according to ex-Arsenal and Chelsea striker Nicolas Anelka.

Messi was hailed as the ‘best player in the world’ by PSG boss Mauricio Pochettino on Monday in his pre-match press conference.

But Anelka believes that Messi, who arrived in the summer from Barcelona, must now play a role to ‘serve’ Mbappe, rather than be the centerpiece of the side.

“Messi was at Barcelona, but now he has to serve Mbappe. He’s been at the club for five years and Messi has to respect him,” he said.

Mbappe has a year left on his deal and is yet to reach an agreement over an extension amid strong interest from Real Madrid.

The World Cup-winning striker is the team’s top scorer so far this season on four goals, three ahead of Neymar and four ahead of Messi, who is yet to score for his new team.

While Anelka believes the team needs to cater to the demands of Mbappe, the former France striker has been left bemused at Pochettino’s treatment of Messi so far.

“A forward needs his coach to show him confidence, and that right there won’t do it,” he said, referring to Messi’s surprise at being substituted against Lyon.

“I’m getting ahead of myself but Messi will not forget what Pochettino has done. It will stay with him. He’s the star of the team and it was his first game at the Parc des Princes. It’s going to be very difficult to recover from that as a situation.”

Anelka added: “Messi didn’t play against Metz, and for me that’s already a response. You can’t manage Messi like that. The coach wanted to send out a strong message, which is good, but this is Messi.”

Messi looks to have shaken off a knee injury to be fit for yesterday’s heavyweight Champions League clash with Manchester City.

In Defense Of Application Of Hash Remedies