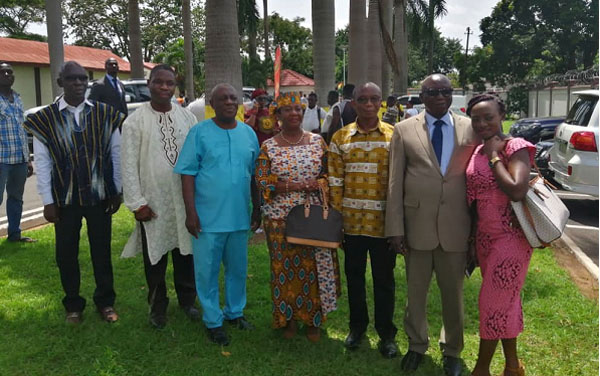 S.K. Boafo (5th left) with other board members

The Governing Board of the Minerals Commission, led by the chairman, Samson Kwaku Boafo, has paid a courtesy call on the Asantehene, Otumfuo Osei Tutu II, at the Manhyia Palace in Kumasi.

The visit was to commemorate the 20th anniversary of his royal highness as king of the Asante Kingdom.

S.K. Boafo commended the Asantehene for his immense and diverse contributions toward peace, unity and socio-economic development of Asanteman and Ghana as a whole.

The delegation presented the Asantehene with cash and assorted drinks in support of his 20th anniversary.

Asantehene, through his linguist, commended Minerals Commission for its continuous collaboration with the Asante kingdom and growth of the nation.

Speaking to the media after the presentation, Mr. Boafo, commended Otumfuo for his exemplary leadership.

He said “good works need to be appreciated and he has urged other chiefs in the country to stand out and be sources of development in their communities.

He added that the contributions of Otumfuo to the nation cannot be quantified and his assistance to Minerals Commission all these years has been enormous especially with a number of mining companies located in Ashanti Region.