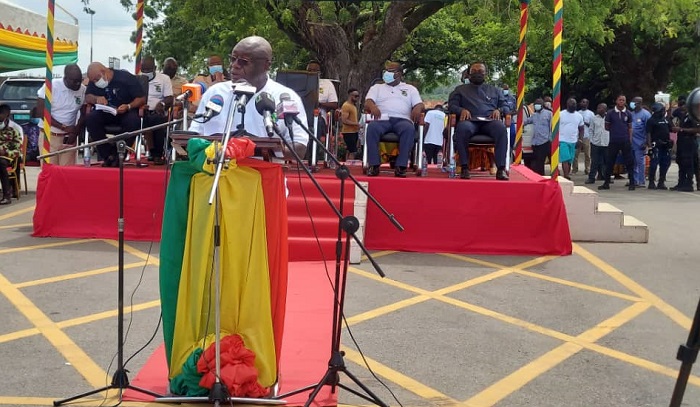 THE MINISTER for Environment, Science, Technology, and Innovation (MESTI), Dr. Kwaku Afriyie, has branded people involved in illegal mining in the country, destroying forest reserves and water bodies engaging in criminality and have to be checked.

Dr. Afriyie urged Ghanaians ‘to first fix their minds and attitudes’ in the effort to get the Akufo-Addo-led government to fix the country as they are part of the challenges the country is facing.

The minister was speaking at the 2021 World Environment Day (WED) held at Ejisu-Juaben in the Ashanti Region on Saturday, June 5, 2021.

The ministry, he said, would work tirelessly with the Ministry of Lands and Natural Resources and other stakeholders to restore the quality of polluted water bodies, degraded forests and lands.

He reminded Ghanaians that the Mining Act of 2016 has also been amended so a person can serve between 15 and 25 years in prison if found guilty by the courts for illegal mining.

World Environment Day is the United Nations’ flagship day for promoting worldwide awareness and action for the environment. The theme for this year’s celebration is, “Ecosystem Restoration”. But in Ghana, the slogan is, “Let’s Unite to Save the Environment”.

Giving a recent Ghana Country Environmental Analysis launched by the World Bank a few months ago, Dr. Afriyie said the cost of environmental degradation in Ghana annually is estimated at US$11 billion.

The analysis, he disclosed, pointed to the conclusion that environmental degradation and unsustainable natural resource use, pose a significant risk to future economic growth, as well as a threat to public and ecosystem health.

He directed the planning authorities in the municipalities, districts, and the Environmental Protection Agency to spearhead the fight against environmental degradation by enforcing the requisite laws and regulations.

He also appealed to traditional authorities to promote and uphold their cultural values that go a long way to support the conservation agenda.

On his part, Dr. Henry Kwabena Kokofu, who is the Executive Director for Environmental Protection Agency (EPA), said, human activities have compromised the benefits derived from ecosystems.

The former Bantama MP also noted that urbanization and infrastructural development have had detrimental impacts on urban ecosystems through habitat conversion.

He condemned the wanton degradation of wetlands and called on individuals, groups and organizations to desist from this practice forthwith.

Daasebre Otuo Serebour II, Omanhene of Juaben, who was the chairman for the occasion commended Dr. Kwaku Afriyie and Dr. Kwabena Kokofu for their respective roles in restoring the environment for future generations.