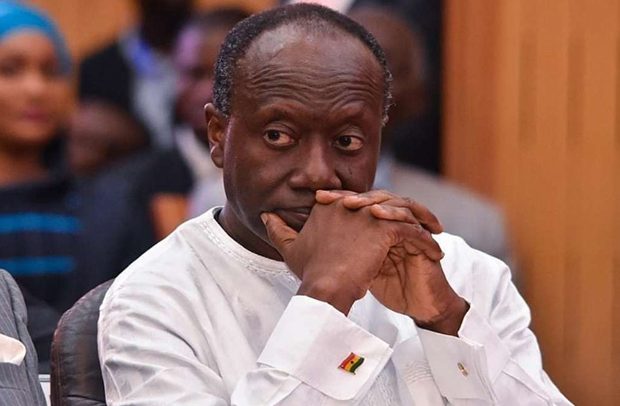 Minority in Parliament has initiated a process in the House to get Finance Minister, Ken Ofori-Atta out of office.

The members of the opposition National Democratic Congress (NDC) have filed a motion in Parliament for a vote of censure against Ken Ofori-Atta, DGN Online can report.

The motion, according to sources, has been signed by almost all members of the caucus, making it admissible on the floor of Parliament so that it can be moved in the House.
However, they will need two thirds of members to push the agenda to remove the minister through.

This is in accordance with Article 82 of the 1992 constitution of the Republic of Ghana.

Per the Constitutional provision, Article 82 of the 1992 constitution states: “1. Parliament may, by a resolution supported by the votes of not less than two-thirds of all the members of Parliament, pass a vote of censure on a Minister of State.

2. A motion for the resolution referred to in clause (1) of this article shall not be moved in Parliament unless:

a. seven days’ notice has been given of the motion; and

b. the notice for the motion has been signed by not less than one-third of all the members of Parliament;

3. The motion shall be debated in Parliament within fourteen days after the receipt by the Speaker of the notice for the motion.

4. A Minister of State in respect of whom a vote of censure is debated under clause (3) of this article is entitled, during the debate, to be heard in his defence.

5. Where a vote of censure is passed against a Minister under this article the President may, unless the Minister resigns his office, revoke his appointment as a Minister.

However, there is a required threshold which demands that the motion must be signed by not less than one-third of all members in the House before it can be moved in Parliament.

Interestingly, the requirement for the motion to be supported by the votes of not less than two-thirds of all the members of Parliament, in order to pass a vote of censure on a Minister of State, will not be met by the Minority in Parliament without the support of members from the Majority side, considering the current state of the House.

This follows calls by member of the NDC including former President John Dramani Mahama who after President Akufo-Addo’s 1 July 2022 announced the directive for the Finance Minister to begin formal engagements with the International Monetary Fund (IMF) have asked the minister to resign.

But the minister in his response to their calls expressed his unpreparedness to resign over Ghana’s decision to seek balance-of-payments support from the International Monetary Fund, although he was against the decision in principle.

Speaking at the national annual delegates’ conference of the governing New Patriotic Party in Accra on Saturday 16 July 16, 2022, Ofori-Atta pointed out that resigning is not the best option now.

According to him, “I will not resign,” the Finance Minister said. “It is almost like telling a father to resign from his children because he has changed his mind.

“There are times that decisions have to be made for the survival of a country and, therefore, if circumstances such as COVID or the Ukraine war occur which are not typical, it does change the environment, and sensible people will change their minds,” Ofori-Atta said.

President Mills Will Not Be Forgotten- President Akufo-Addo