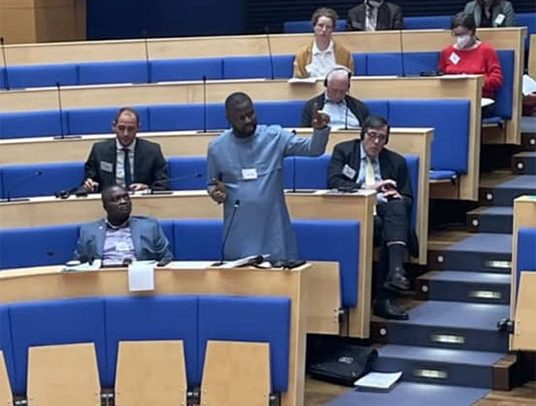 Majority Chief Whip and MP for Nsawam/Adoagyiri, Frank Annoh-Dompreh, says African and European decision makers need to adapt their cooperation to respond to challenges of today and in the future.

According to him, this is especially of importance as autocratic players such as China and Russia are increasing their activities on the African continent to promote an opposing model of governance.

Speaking at the 2022 German-African Conference of Parliamentarians in Berlin, Mr Annoh-Dompreh stated, “In light of the new EU-Africa strategy adopted in February, 2022, this year is an important one for the European-African parliamentarian dialogue.”

The EU, in February this year, revealed the first regional plan of its Global Gateway investment scheme, with African states set to receive €150 billion in funding, and the NPP MP praised the EU’s plan to become Africa’s “strongest partner” by 2030.

The conference was held in Berlin in Germany from May 9 to 10, 2022, with representatives drawn across the African continent and Europe.

The conference was centred on Africa and Europe relationship in the age of a new geopolitical rivalry and how to improve bilateral cooperation.

“Bringing all African heads of states together to meet in Moscow was not ordinary. And all the other parts of the world are now focusing on Africa. When you create a vacuum that vacuum must be filled. There is hope because naturally you are the people we gravitate towards,” Annoh-Dompreh indicated.

He said Africans also need clarity of reasoning, adding, “We should not be talking about too many things at the same time. As Africans we should know exactly what we want. What is it we want? Is it technology transfer? And our colleague has talked about the energy transition.”

As Africans, we have missed out in a number of things such as the global development and industrial revolution. But this one we shouldn’t miss out because now you see, everybody is pointing his fingers at us,” he posited.

He continued, “What it means is that we should also hold our leaders accountable for them to speak to the rightful narrative.”