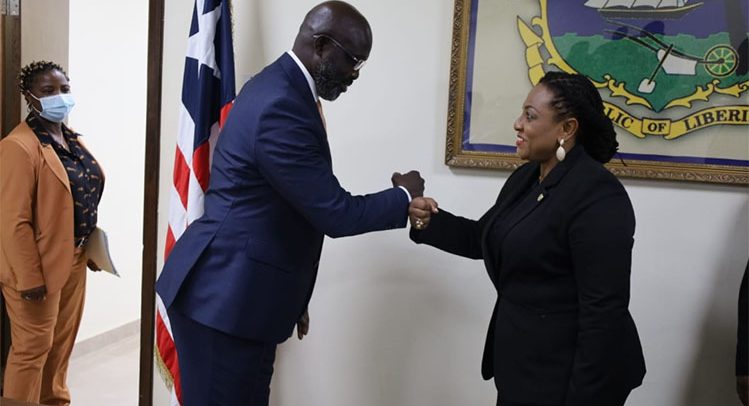 The newly appointed Resident Representative of the President of ECOWAS Commission, H.E. Madam Josephine Nkrumah
presented her letters of credence to the President of the Republic of Liberia, George Manneh Weah, Sr.

Subsequently, she held closed door discussions with the President of Liberia and high-level members of his cabinet. Her Exellency Madam Nkrumah conveyed fraternal greetings from His Excellency the President of the ECOWAS Commis-sion, Jean Claude Kassi BROU to President George Manneh Weah.

In her remarks, she commended the President for his commitment to ECOWAS’ goal towards peace and stability in Liberia, the sub-region and specifically his support for decisions that have come out of the various ECOWAS summit relative to peace in Guinea and Mali.

She also congratulated him for Liberia’s first role as the Head of an ECOWAS agency – GIABA, under His Excellency’s tenure. On behalf of ECOWAS, she assured His Excellency of ECOWAS‘ commitment to supporting the peace and stability of Liberia and its young democracy.

President Weah in his response reaffirmed Liberia’s commitment to ECOWAS’ goals and objectives for regional peace, stability, and reintegration. He urged ECOWAS to take decisive and expedient interventions in resolving the crisis in Guinea. He also assured ECOWAS of the Liberian Government’s commitment to providing an enabling environment for ECOWAS to execute its mandate under the Office of the Resident Representative.