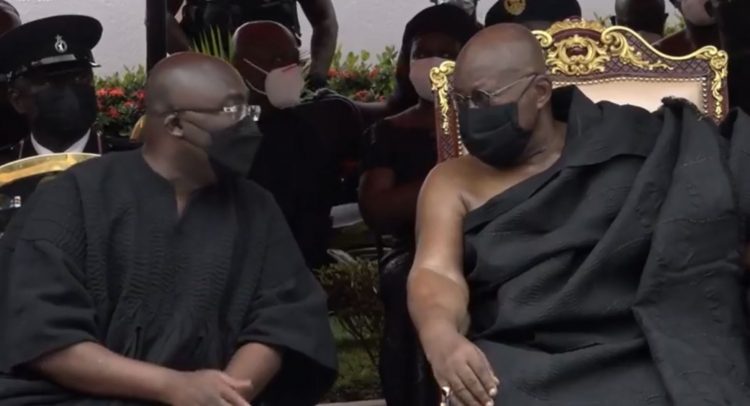 The President and his Vice at the funeral

The deceased was the biological father of Lady Julia Osei Tutu, the wife of Asantehene Otumfuo Osei Tutu II.

Mourners from all corners of the country, who were clad in black attire, trooped to Lady Julia’s house at Ahodwo, Kumasi, where the body was laid for public viewing.

The Asantehene and the Asantehemaa, Nana Ama Konadu Yiadom, were seated close to Lady Julia as scores of mourners consoled them over the loss.

The President’s delegation included the Vice President, Dr. Mahamadu Bawumia, the Chief of Staff, Akosua Frema Osei-Opare, and other officials from the presidency. Also present was the Minister of Energy who is also the Member of Parliament (MP) for Manhyia South, Dr. Matthew Opoku Prempeh.

Officers from the various security agencies in the country, including COP Kofi Boakye, who is a former Ashanti Regional Police Commander, was also at the ceremony.

As expected, some revered traditional leaders in the Asante Kingdom and Ghana in general, were also there in their numbers to support the Asantehene and his wife.

After a well-attended church service in Kumasi, the mortal remains of Opanin Amaning was buried at Akyem Abuakwa, his hometown, on Saturday afternoon.