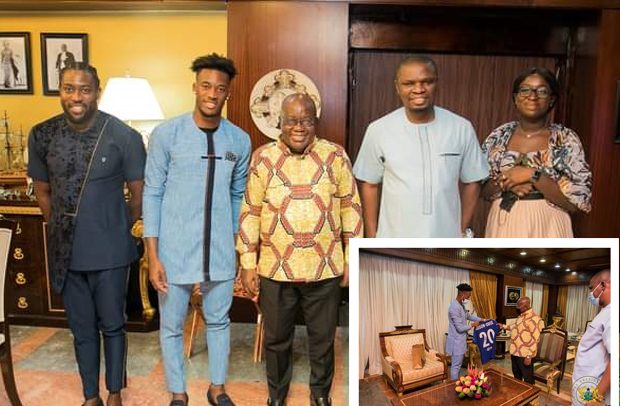 The President flanked by Odoi (2nd L) and the Sports Minister. With them are some family members. INSET: The Chelsea player presenting his shirt to Nana Akufo-Addo

This formed part of his visit to Ghana, the hometown of his parents where he is currently on holidays.

But that was not without talks on the possibility of a switch of his nationality in order to play for Ghana.

In a Facebook post, President Akufo-Addo said, “On Monday, 7th June 2021, Ghanaian-born Chelsea footballer, Callum Hudson-Odoi, paid a courtesy call on me at Jubilee House, the seat of our nation’s presidency.”

“Amongst others, I urged the Minister for Youth and Sports to explore the possibility of having Callum switch nationality, and play for the Black Stars,” he hinted.

The 20-year-old Chelsea winger was born and raised in Wandsworth, Greater London, and the younger brother of non-League striker Bradley Hudson-Odoi and the second son of former Hearts of Oak Ghanaian midfielder Bismark Odoi.

During his time with Chelsea’s academy, Hudson-Odoi was part of the squads which won the U-18 Premier League in 2017 as well as back-to-back FA Youth Cup titles.

His form at youth level was rewarded in January 2018 when he was handed his senior debut and he has since made over 90 appearances for the club.

Hudson-Odoi also enjoyed considerable success at youth level for England, being part of the squad which ended as runners-up in the UEFA European U-17 Championship and which won the FIFA U-17 World Cup in the same year.

In March 2019, he became the youngest player to debut in a competitive match for England, doing so in UEFA Euro 2020 qualifiers against the Czech Republic.

He was educated at Whitgift School in Croydon.