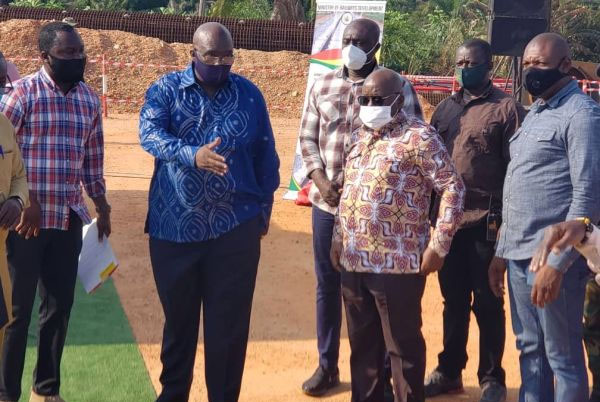 Addressing a gathering of Chiefs and people on day two of his working visit to the Western Region, Mr Akufo-Addo revealed that deep down his heart, he knew his surest bet to resuscitate Ghana’s then ailing railway sector was to appoint Mr Ghartey.

He, however, confessed that appointing Mr. Ghartey was a very challenging decision for him to make.

“I had no doubt in my government that I had somebody who could do that work for me. Fortunately, he also comes from the railway capital of Ghana, Essikado-Ketan, and that is why I gave the job to Joe Ghartey,” the President said.

“And he should come and lead the renaissance of the railways’ system of the country. I can only thank God that he’s been able to live up to my expectations,” he added.

He was speaking at the newly refurbished Railway Training School at Ketan on August 19, 2020.

According to him, “The commitment to reviving the railway sector is absolute, it’s unconditional, and it’s non-negotiable. I can only thank God that he’s been able to live up to my expectations. He has negotiated hard to find the money for all this, and it’s happening and it’s going to continue to happen. And God willing if we get four more you will see the results his labour in the sector.”

President Akufo-Addo assured the gathering particularly the Omanhene of Essikadu of his commitment to transform Ghana’s rail sector into a world-class, appealing to the people to renew his mandate by voting massively for him come December 7.

On his part, the Omanhene for Essikadu Traditional Area, Nana Kobina Nketsiah V, recounted that he was displeased the time he learnt of Joe Ghartey’s appointment, stressing it was not befitting of his person.

He added that it took Joe Ghartey’s confidence and extraordinary capabilities to calm their fears.

“There was a lot of agonies when we learnt Joe Ghartey was appointed the Railways Minister. Joe, Railways? I stood in public and spoke… not to him but for the appointing authorities that they better help him execute the task else it would be a disgrace to us. But in the wisdom of the President, he knew why he chose him,” he said.

“For twenty years we’ve kept to speaking about railway development. We speak about it at the House of Chiefs…. before any President, we bring this issue up.”