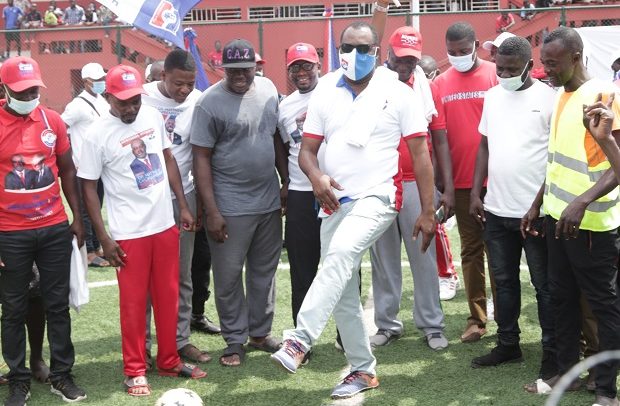 A ONE-DAY sporting event to boost the physical and mental state of the people and also rekindle the spirit of the New Patriotic Party (NPP) ahead of the December polls has been held.

Organized by the Faithful Patriots, a group in the NPP, with support from the NPP Manhyia South Constituency Coordinators, the event took place at the plush-looking Abbey’s Park in Kumasi on Sunday.

The programme was mainly to showcase that the Manhyia South NPP were firmly behind their Member of Parliament (MP), Dr. Matthew Opoku Prempeh, aka ‘Napo’, to retain his seat.

Also, the event was to once again affirm the group’s unalloyed support for President Akufo-Addo to retain his seat and continue to implement positive programmes to transform the country.

Significantly, Napo, who is noted for his passion for sports, was there to make the event grand. The Manhyia South Lawmaker participated in snooker and table tennis games, attracting wild applause from the crowd.

In his remarks, Napo who is a medical doctor admonished his constituents to regularly exercise their bodies so that they would remain strong at all times and contribute their quota towards national development.

He also said the massive patronage of the event, which was organized under strict adherence to Covid-19 protocols, was clear indication the NPP was fully prepared to win votes in his constituency.

The Kumasi Mayor, Osei Assibey Antwi, said President Akufo-Addo and Napo had done more than enough to merit the renewal of their mandates. Football gala was the major highlight of the games, which had attractive prizes at stake.