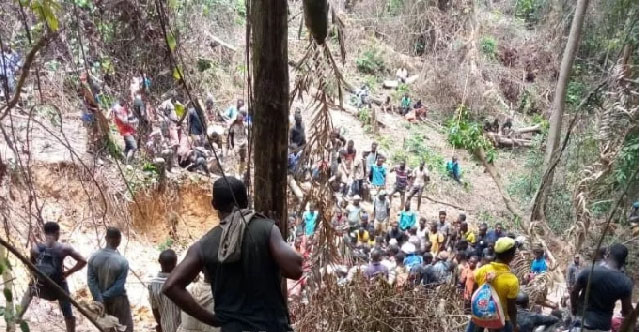 THE Eastern Regional Police Command, in less than ten days, in separate operations, has arrested 65 persons, some alleged to be National Security operatives engaging in illegal mining, popularly known as galamsey, in the region.

The arrested persons, who are in the custody of the Regional Police Command assisting in investigations, were picked up from illegal mining sites, with some of them in military and police fatigues at the time of their arrests.

Yesterday, DAILY GUIDE learnt that the police handed the ‘National Security Operatives’ over to the military who then transported them to Accra for screening.

The Asamankese Divisional Police Commander, ACP Kankam Boadu, confirmed that they had intelligence that some National Security personnel had been accosted at the Akyem Akanteng chief’s palace in the Lower West Akim Municipality.

“We rushed there and they handed over to us the men who claim to be National Security personnel and three illegal miners. Our interim investigation indicates that the National Security personnel came there to mine for gold that is why the town’s folks arrested them. We rearrested them and sent them to the Regional Police Command to continue with their investigation,” he said.

Kwabena Adu-Bonnah, an official from the Forestry Commission (FC), also confirmed the arrests to the media saying, “In a matter of ten days, we’ve been able to arrest 65 people who are either in military or police outfits claiming to be national security officers.”

He said “last week, we arrested some and this week we arrested a total of 28 from some galamsey sites in the region. They have all been handed over to the police for further action.” 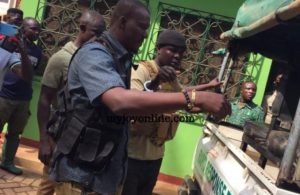 He said that 19 persons who claim to be National Security operatives were apprehended by the police for illegally mining gold in the Atewa Forest Reserve on Tuesday.

The suspects, who were wearing military uniforms, invaded the reserve from Akyem-Akanteng onboard a Toyota Land Cruiser V8 with sophisticated rifles on Tuesday dawn under the guise of clamping down on illegal mining.

They reportedly clashed with angry residents and forest guards who had vowed to resist illegal miners.

In the ensuing melee, the residents reportedly deflated the tires of the five vehicles they used for the operation and also vandalised some of them.

According to Mr. Adu-Bonnah, the residents outnumbered and overpowered the armed men and arrested them and handed them over to the police.

“A resident from Akanteng informed us about the presence of some people in military outfits entering the galamsey area so we mobilised, and around 4 o’clock we went to the area and we were able to arrest about 19 and later additional 11 suspects,” he said.

The Assembly Member for Akanteng Electoral Area, Henry Owusu Kesse, narrated that three weeks ago, there was the claim that a huge gold deposit had been discovered in a portion of the Atewa Forest by an illegal miner.

According to the Assemblyman, for the past three weeks, illegal miners from Obuasi, Tarkwa and other places, armed with guns, have besieged the area to mine gold illegally but the residents have been fighting them with the support of forest guards.

“Since they made the claims that huge gold deposit has been found in the area, we have been on the alert to protect the forest, so when on Sunday and Monday night armed men including National Security operatives invaded the forest, the youth massed up and arrested them,” he concluded. 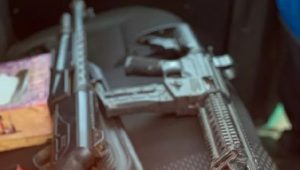