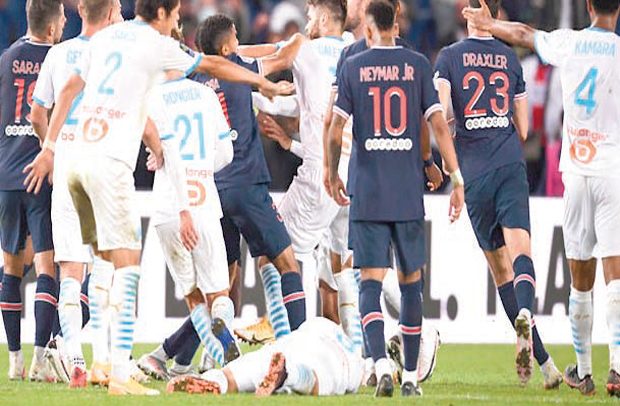 PSG’s and Marseille’s players scuffle at the end of the French L1 football match between PSG and Marseille at the Parc de Princes stadium.

Marseille earned a smash-and-grab 1-0 win at Ligue 1 champions Paris Saint-Germain after forward Florian Thauvin struck in the 31st minute of a pulsating though ill-tempered match that ended with a brawl that saw Neymar sent off on Sunday.

Littered with fouls throughout, the clash boiled over in the last minute of stoppage time with referee Jerome Brisard sending off five players after a full-scale fight broke out on the pitch.

PSG’s Neymar, Layvin Kurzawa and Leandro Paredes as well as Marseille’s duo of Dario Benedetto and Jordan Amavi were given their marching orders after rival players threw punches and kicks at each other.

An angry Neymar, who had clashed a number of times with Marseille’s Alvaro Gonzalez during the match, tweeted after the game, “The only regret I have is for not being in the face of this a–hole.”

Neymar later sent out a second tweet, calling for action to be taken after claiming he was called a racial slur at some point during the game.

“VAR catching my ‘aggression’ is easy,” the tweet began. “Now I want to see the image of the racist calling me a ‘monkey motherf—er’… this is what I want to see!”

The ugly scenes, however, did not bother Marseille manager Andre Villas-Boas after the 1993 European Cup winners celebrated their first league win against PSG since November 2011.

“A tough and important win as well as a historic one,” Villas-Boas told reporters after his side condemned last season’s Champions League runners-up to a second successive defeat following a 1-0 opening-day setback at Lens.”

“A total of 14 cards were brandished and five of them were red, which means the match got out of control,” Leonardo, PSG Sporting Director, told the Telefoot television channel.

“[Brisard] lost his head. He officiated the League Cup final but he doesn’t have the experience for this kind of fixture.”

GTA Unveils Pillars For ‘Beyond The Return’