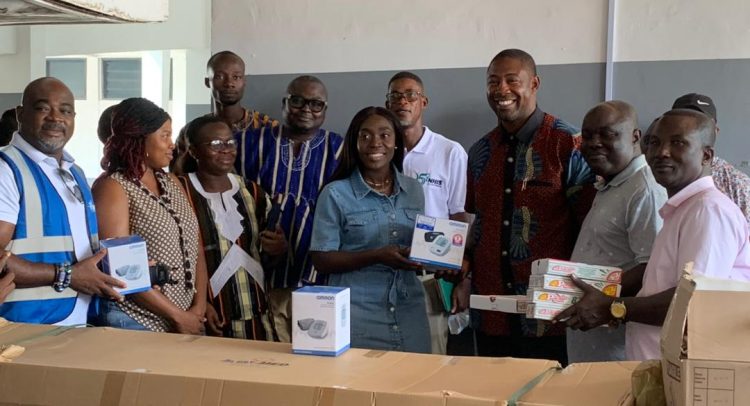 The staff of the hospitals were also presented with food through the kind sponsorship of Papa’s Pizza.

Presenting the equipment, Chief Executive Officer of the NHIA, Dr. Bernard Okoe Boye said the gesture which is the first of its kind was to show support to the staff of the health facilities who have left their families during the holidays to care for the sick.

He said the NHIA values the work they do adding that they are key partners in ensuring the fulfilment of the Authority’s mandate.

Dr. Okoe Boye said the NHIA can only function properly if health facilities have the needed resources and equipment to treat patients who come to them using the National Health Insurance Scheme (NHIS) hence the donation of the medical equipment.

“December is our awareness month and we encourage all Ghanaians to register and put themselves unto the scheme. When you register in December, you can access healthcare immediately meaning that the compulsory waiting period of 30 days which affects all groups except 70 years and above does not affect you, so this is a good time to make merry and be covered medically,” he said.

He also mentioned that with the ‘MyNHIS’ app individual can register in the comfort of their homes.

Dr. Okoe Boye also urged the staff to keep up the good work adding that the NHIA appreciates their hard work.

Chief Executive Officer (CEO) of the KBTH, Dr. Opoku Ware Ampomah expressed his appreciation to the NHIA for the show of love and called on other organisations and groups to remember the sick during the festive season.

Hospital administrator for the Kaneshie Polyclinic, Adelaide Setordji, also thanked the NHIA for the surprise visit saying the gesture will go a long way to encourage the staff of the polyclinic to give their best.

All Set For Afrochella Music Festival 2022