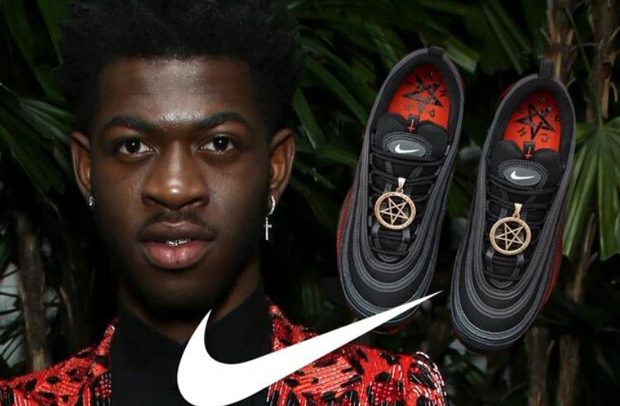 MSCHF Product Studio has found itself in legal tussle after partnering with Lil Nas X in producing the devilish shoes which contain blood.

The shoes have come to be known as the “blood shoes”.

And Nike, according to reports, is suing MSCHF Product Studio because it does not want to be associated with any devilish brand.

Reports say the rapper has not been named as a defendant in the lawsuit.

However, he has taken to Twitter to share a meme and announced the legal case against his controversial brand.

“Me after the Nike lawsuit,” he wrote on Twitter.

me after the nike lawsuit pic.twitter.com/XVLjHlSrru

In recent days, Lil Nas has been promoting the customized Nike Air Max 97 shoes which feature the pentagram symbol, a Bible verse that references Satan, and allegedly a drop of blood from one of MSCHF’s employees.

MSCHF is also believed to be making only 666 pairs.

There has been an outrage in the world of sports following the release of the Satan Shoe with stars like Trevor Lawrence and Nick Young voicing their disgust with the product.

In its lawsuit said to have been obtained by TMZ, Nike alleges that MSCHF is tricking consumers into thinking it approved the Satan-themed shoes.

However, Nike insists it did not authorize the production of the shoes and “is in no way connected with this project.”

According to Nike in its suit, MSCHF buys the shoes from Nike, then the artists it works with make their own creative modifications before selling them at a higher price.

Nike says it was suing for trademark infringement because the famous Swoosh logo is still prominently featured on X’s shoes.

The shoe giant is seeking damages, and wants the judge to block all sales of the Satan Shoe.