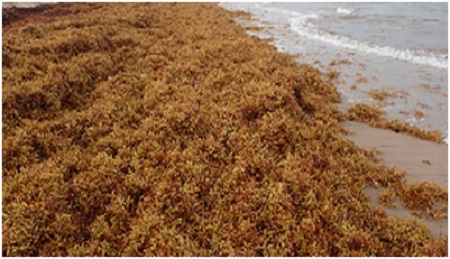 CONCERNED RESIDENTS of Nzema communities along Ghana’s west coastline have called on the Western Regional Minister, Kwabena Okyere Darko-Mensah, to come to their aid to help remove seaweed invasion in the area.

Known as sargassum, the brown algae, largely considered a pest, floats in island masses on water bodies. The weed has taken over the region’s coastlines and continues to grow in size.

During decay, the weed emits foul smell, posing danger to the fisherfolk’s ability to access the sea. It also threatens the livelihood of residents and affects economic activities in the area.

Residents of Nzema, under the umbrella name the Ghana Environmental Advocacy Group, has petitioned the minister to help them deal with the phenomenon.

The petition, also copied to other state agencies and the Executive Secretary to the President, Nana Asante Bediatuo, the NPP Chairman Freddie Blay, and the DCE of the Nzema East District, Emmanuel Armah Kofi Buah, stated that although the weed has been persistent in the area for the past eight weeks and has been noticed by members of the Environmental Protection Agency (EPA), the community has not had any feedback since their visit.

“What worries us even more is the palpable lack of interest or information from institutions, national, regional, and local in the face of this disturbing phenomenon,” the group stated agitatedly.

They also called on the Regional Minister to take urgent steps to get the EPA as well as other environmental agencies to resolve the issue.

The petition was signed by one Elizabeth Allua Vaah on behalf of Ghana Environmental Advocacy Group and 24 other persons.