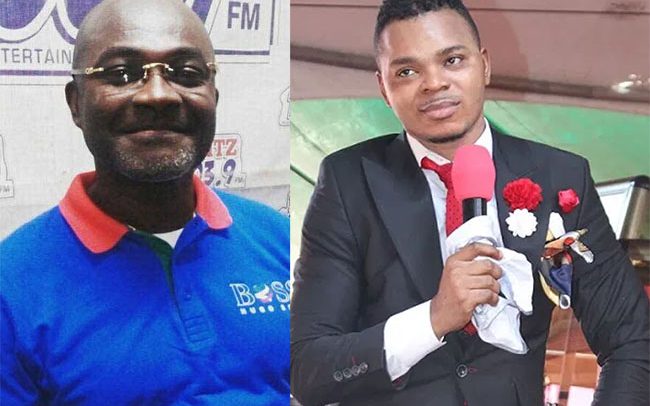 AN OUTSPOKEN politician, Kennedy Agyapong, who is the Member of Parliament (MP) for Assin Central, has taken his ‘war’ against controversial pastor Prophet Daniel Obinim to another level, by saying the leader of the International God’s Way Church is an occultist.

According to Mr. Agyapong, he has countless evidence to buttress his wild claim including a video of Obinim, where the pastor, who claims to be an angel of God and goes to heaven frequently, openly admitted that indeed he was into occultism.

In a recent interview on his own private television station, NET2, in Accra, Mr. Agyapong claimed that Obinim had been using human parts for sacrifices and said he would continue to expose what he called the ‘evil’ and ‘criminal’ deeds of Obinim.

He said he was devoting his resources to get Obinim apprehended and also ensure the permanent closure of his church to stop his ‘criminal’ activities.

He said “characters like Prophet Obinim, a known occultist, who hides behind the holy Bible, to spill the blood of innocent human beings for sacrifices, is not fit to live in society”, and he would ensure that he is locked up soon.

According to him, it was never his intention to delve into the ‘evil’ works of Prophet Obinim, but he had decided to do so now because Obinim’s wife, Florence Obinim, had stepped on his toes and got him angry.

Mr. Agyapong said Prophet Obinim’s hands are ‘soaked deep in human blood’, prophesying that Obinim would go mad and walk naked in the streets of the country before he dies, if he refuses to confess his sins.

According to Mr. Agyapong, people have been bombarding him with hardcore evidence of Obinim’s alleged occultist acts, vowing to release them in bits anytime that Florence would provoke him.

The MP said he has time and resources to run Bishop Obinim down, stating that by the time he completes his attacks on him, not a ‘single sound-minded’ person would visit his church again.

Kennedy Agyapong alleged that a Guinea-based Ghanaian pastor, identified only as Pastor Ken, once visited Obinim to help him become powerful and Obinim ended up leading Pastor Ken to become a cannibal.

“Obinim contacted a nurse at Korle-Bu Teaching Hospital in Accra, who provided a placenta, which he (Obinim) mixed with rice to prepare food for Pastor Ken to eat,” he alleged, adding that “this guy is ready to testify.”

Obinim, he said, explained to Pastor Ken that the food prepared with placenta would give him “commanding powers” also known as “Do as I say” to enable Pastor Ken to control his congregation like ‘fools’.

Yelling unprintable words at Obinim for being evil, he said he suspected Obinim uses his so-called commanding powers to lure pretty-looking girls into his church to warm his bed even though he is married.

Mr. Agyapong also alleged that Obinim has a Mallam friend at Akyem Tafo in the Eastern Region, who provides Obinim with human skull for sacrifices.

“He took this same Pastor Ken to Mallam Abedina, who provided a human skull to Obinim to grind and prepare soap that he (Obinim) has labelled as ‘Crowd Puller’ for the pastor to use to draw crowd to his church,” he claimed.

He also displayed a picture of Obinim and four other people, who he claimed were initiating one Kwame Ottoo into occultism, saying they followed with a strange cat sacrifice around 1am when everybody was asleep.

“After the initiation ceremony, which took place in 2004, Obinim and his cohorts killed two cats and mixed their blood with lots of coins, which Kwame Otoo and Osofo Kwame sprinkled in the streets in Kumasi at 1am.”

“Do you call this occultist as man of God?” the MP fired and indicated that Obinim’s ‘time is up.’

The outspoken lawmaker also played a video on NET2 which captured a man he says is Obinim, bragging about how the blood of fresh born babies, from two weeks to three months, could be used to help people to become fabulously rich overnight.

In the same short video, the supposed Obinim also stated emphatically that human eyes, human fingers, fresh babies and pregnant women could be effectively used as sacrifices to enable someone to become very rich, saying in the video that “you will bury the pregnant woman alive and the money will start flowing. You will see a lot of money in your washroom without working for it.”

He also said Obinim once ordered a pastor, who had visited him for spiritual help, to sleep with his own sister, and that pastor wiped the sperm with a white handkerchief and gave it back to Obinim for sacrifice.

According to Mr. Agyapong, Obinim, who seemed to have hypnotized his congregation and the people he comes into contact with, told the same pastor to sleep with a man before he (Obinim) could help him.

The Assin Central lawmaker stated that the pastor, who all this while was being remote-controlled by Obinim, suddenly came back to his senses and refused to sleep with a man as Obinim had ordered him to do.

In a clear response to Mr. Agyapong, Obinim has said in an audio recording that he has ceased the ‘war’ with the MP and refused to react to the wild allegations made against him.