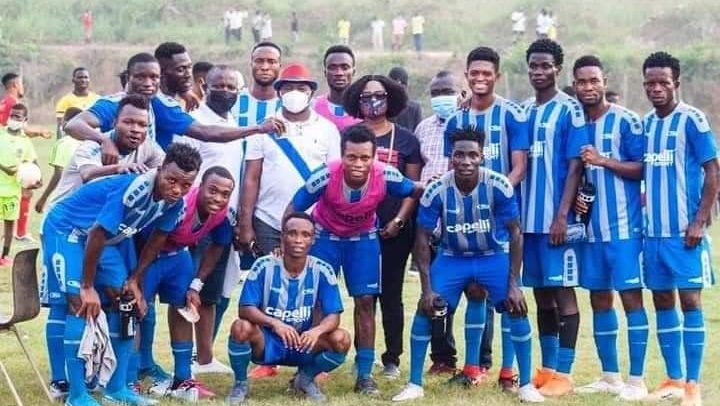 Member of Parliament for Akyem Oda, Alexander Akwasi Acquah, has congratulated the Management, Technical Team, and the playing body of the Akyem Oda based Kotoku Royals, for qualifying into Ghana’s premier league for the first time.

He addressed supporters who had excitedly gathered in their numbers at the Oda Sports Stadium to welcome the gallant Royals home, after holding Tema Youth to a goalless game in Tema.

The MP stated that history had been made and the dream of Kotokuman has become a reality.

He was particularly excited as he had foreseen this dream a long time ago, even before he decided to contest the Parliamentary elections.

He stated that he made a practical effort and partnered with the football team to achieve this feat!!!!

“I knew the extent to which the economy of Akyem Oda and its environs will be rejuvenated, should our football team qualify into Ghana’s premier league” he stated.

“That was the backbone upon which I decided to associate myself with the team at a time when no one believed in their efforts,” he told the excited supporters who had waited into the night for the team to arrive at about 9pm.

Many were those who criticized the MP for wasting money on the team when he partnered with them.

Akwesi Acquah had given cash rewards to the playing body after winning each game in the last season.

Although the rewards scheme did not achieve the anticipated aim at that time, Akwasi Acquah did not give up or relent in his efforts.

Sunday’s jubilation carnival was attended by thousands of supporters, some of whom had been with the team at the Tema Sports Stadium and had followed them to Akyem Oda to partake in the qualifying celebrations.

This, the MP said, justifies any investment he had made to encourage the team to press on to this stage.

Alexander Akwasi Acquah thanked all those who responded to the clarion call to push the team to achieve this success and promised that the support base will be well organized to ensure that the team stays in the Premier League forever.

He excitedly exclaimed to the crowd: “Kotoku Royals has come to stay. They have come so stay forever”.

The Akyem Oda based Division One side, Kotoku Royals on Sunday secured promotion to the Ghana Premier League.

This is the first time in their history the team is joining premier league from the National Division One League Zone Three.

The promotion follows their goalless drawn game against Tema Youth on Sunday afternoon in their match day 30 clash.

Kotoku Royals have been in good form the entire season as they have secured promotion at a canter throughout the 2022/2023 League season.