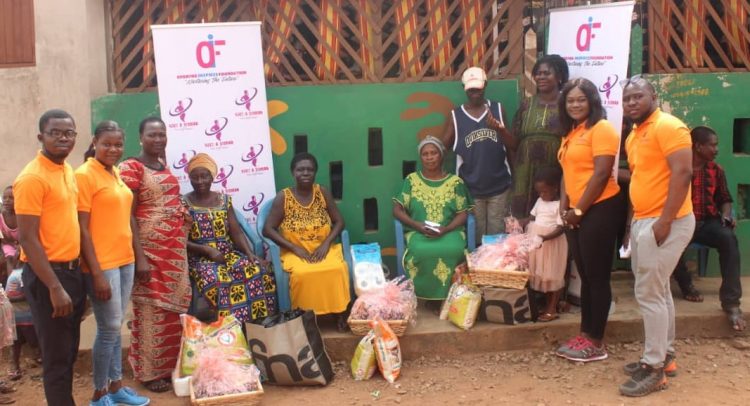 A non-governmental organization, Oforiwa Inspires Foundation (OIF) under its ‘Still A Woman’ Project which focuses on changing the existing moral and socio-cultural beliefs surrounding infertility issues has made donations of cash, food items and toiletries to women with infertility issues in the Tutu Akuapem District of the Eastern region.

The “Still A Woman” Project through which the donation was made is also aimed at breaking the stigma attached to infertility among women through awareness creation and advocacy.

The beneficiaries, all above the age of 40 have either been neglected or living in isolation because of their inability to have children and varying circumstances of infertility.

Akua Oforiwa Darko, founder of the OIF and a Broadcast Journalist with the Ghana Broadcasting Corporation (GBC), speaking with the media after the presentation of the items, said she was led to raise funds to support the women after reporting on their predicament.

“Their stories moved me and I said apart from using my medium to tell their stories why don’t I go a step further to introduce the Still A Woman Project and raise some funds for them,” she said.

“Through the benevolence of some good hearted people we have been able to do this,” she added.

Ms. Darko further noted that the gesture is a way of providing the women who are mostly isolated due to the stigma attached to infertility with some support to improve their livelihoods.

One of the beneficiaries, Madam Vida Danso 67 year-old who lives alone, on behalf of the women thanked the OIF for the support saying that the donation was timely.

She said the stigma associated with infertility was real, adding that it is very difficult to avoid being called names by members of society.

“We have been waiting for you since you told is you would be coming back and today you have fulfilled your promise,” she said. “We thank you very much for showing us love.”

Financial Sector Healthier Than Ever After Clean Up – BoG Boss