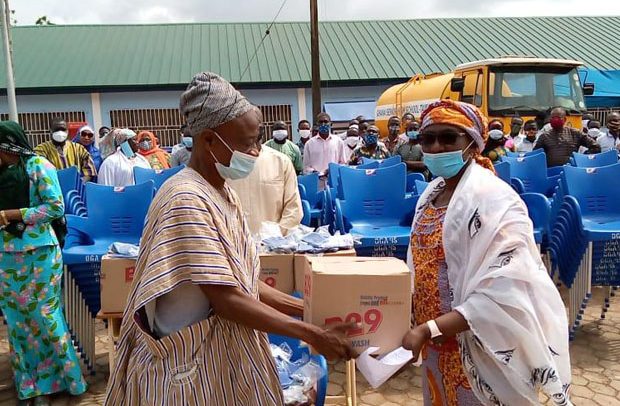 The 1995 Year Group of the Ghana Senior High School (Ghanasco) in the Northern region has made a donation of 200 chairs, 200 nose masks and cartons of liquid soap totaling GHC 13,000.00 to the school authorities.

Abdulai Abdul-Malik, President of the group handed over the items to Chief Dul-lana, Northern Regional Chairman of Old Ghanascans’ Association who handed the items to the headmistress of the school.

He called on his colleagues to show interest in the activities of the school and admonished other Year Groups to emulate the good examples of the group.

Mr. Abdul-Malik said that the 1995 Group is considering a Homecoming to commemorate its 25th Anniversary.

The Headmistress of the Ghana Senior High School (Ghanasco) Hajia Amina was thankful to OGA ’95 year group for the support, adding that the items came at the right time when they were running short of them.

“The sanitizers couldn’t have come at the right time because what we have is not enough and so this will go a long way to supplement whatever government has given us.”

She mentioned Assembly Hall complex, classroom blocks, fence wall and deplorable state of some of the male dormitories as part of the challenges confronting the school and called on government and other philanthropic organizations to come to the aid of the school.