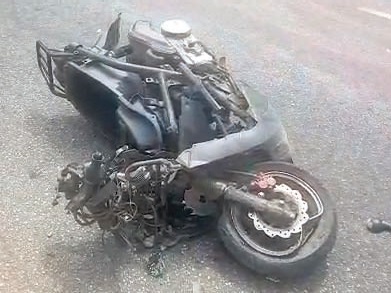 The Okada riders had been organized by the National Democratic Congress (NDC) regional executives to boost the campaign of the former President, who is staging a comeback, and has promised to legalize the Okada for commercial transport.

Scores of Okada riders were made to lead the convoy of the former President on their way to meet party supporters at Aworowa, a suburb of Techiman.

An eyewitness account has it that one of the Okada riders, a staunch NDC supporter popularly called Bentoa, was riding at top speed with several other bikes exhibiting their skills amidst honking.

Suddenly, the bike skidded off the road when they got to a spot around Akrofrom, also a suburb of Techiman on the Techiman-Wenchi road.

Bentoa lost control and together with the pillion rider, whose name was also given as Nuhu, said to be a supervisor of a popular waste management company, fell off the motorbike and sustained serious injuries.

Bentoa was said to have suffered a deep cut on his forehead with blood all over his body and went into coma whilst his friend Nuhu could also not walk.

The two were then rushed to the Techiman Holy Family Hospital in a taxi by some of their own colleague Okada riders.

There were journalists accompanying the former President who reportedly saw the bloody incident, but it was unclear why they could not report it.

Some are speculating that reporting the incident could be a dent for Mr. Mahama’s campaign for the commercialization of Okada business.

DAILY GUIDE sources say the Mahama team became aware of the incident but allegedly did not bother to visit Bentoa, who has since come out of coma; Nuhu is at the hospital.