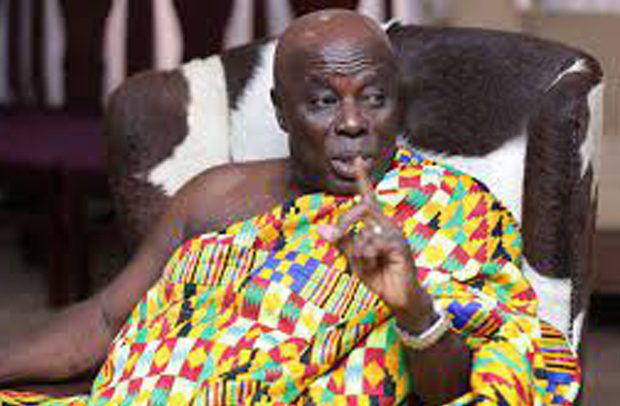 THE Okyenhene, Osagyefuo Amoatia Ofori Panyin, has set an Environmental Protection Task Force to work in partnership with the country’s security forces to help combat illegal mining in Kyebi and its environs in the Eastern Region.

The Okyehene, who is a longstanding environmentalist, recently bemoaned the infiltration of illegal migrants mostly from Burkina Faso, Mali, and Cote d’Ivoire in the Abuakwa South Municipality, to engage in illegal mining.

As part of the measures to flush them out, the Okyenhene’s office said the Environmental Protection Task Force will work in partnership with the local police, immigration, EPA, and other stakeholders to put a stop to the galamsey activities in Kyebi and its environs.

The Gyaasehene of Akyem Abuakwa Traditional Council, also the Chief of Akyem-Kwabeng, Daasebre Ayimadu Kantamantu, speaking at the Ofori Panin Fie, Kyebi, on the instructions of the Okyenhene, said the chiefs are ready to assist in protecting the environment for posterity.

According to him, when it comes to the fight against illegal mining, the Okyenhene’s commitment right from the onset of his reign cannot be undermined.

He said, “I am surprised some media personalities and some people in the country tag Kyebi when it comes to galamsey. They go on to attack the chiefs as if we are behind the act, which is not true.”

He said “as a response to this imminent threat, the Okyenhene has set the Okyeman Environmental Protection Task Force to work in partnership with the local police, immigration, EPA, and other stakeholders to put a stop to the galamsey activities in Kyebi and its environs.”

Daasebre Ayimadu said “the task force, as we speak, has managed to put a stop to mining along the Birim River, specifically Apapam to Kyebi, which has ensured a remarkable improvement of water quality,” adding that “Okyeman under the leadership of Osagyefuo is ready to partner with the government to ensure that this menace which is destroying our water bodies and the forest is completely brought to an end.”

He lauded President Akufo-Addo and his administration for the commitment, achievement, and initiative towards illegal mining despite the stiff resistance from some recalcitrant illegal miners.

Daasebre Ayimadu Kantamantu said Okyeman has appreciated the President for paying attention to their concerns when Osagyefuo Amoatia Ofori Panyin paid a courtesy call to the Jubilee House last month to discuss the threats of illegal mining in Kyebi and its environs.

“In our discussions, we expressed our concerns on the problems of galamsey which has plagued and deprived several towns and communities of clean drinking water and irrigation for their farmlands,” he said, adding “I am glad and grateful to indicate that the President paid attention to our concerns at the meeting and has subsequently demonstrated his commitment to our concern and deployed the security forces to combat these problems starting with Twifo Praso area.”

He urged the public to continue to assist with reports on any operation of illegal mining, chainsaw, and sand winning in the communities and said that all excavators, changfangs and other mining equipment spotted in illegal mining areas would be handed to the law enforcement agencies.

In a related development, the Minister of the Interior, Ambrose Dery, has said the Ghana Immigration Service office in Kyebi has been empowered to clamp down on foreigners engaging in illegal mining.

Speaking to the media at the sidelines of Regional Immigration Commanders and Management Retreat in Koforidua, the minister acknowledged the tiring effort of the Immigration Service in the fight against illegal mining, but urged them to do more.

“Immigration has been doing very well. You don’t get to know much about them because when they repatriate people, they don’t normally publish it sometimes. After all, we don’t want the diplomatic relationship to be adversely affected,” the minister said.

“In the case of what the Okyenhene said that is valid, the office in Kyebi has been empowered to do their work there, but it is not peculiar to Kyebi alone, it is all over the country and that is why we have expanded the activities of Ghana Immigration Service to all districts and municipalities. We expect that landlords will cooperate with us. Any foreigner who engages in illegal activity is a subject for the immigration, and immigration has to investigate such people,” he added.