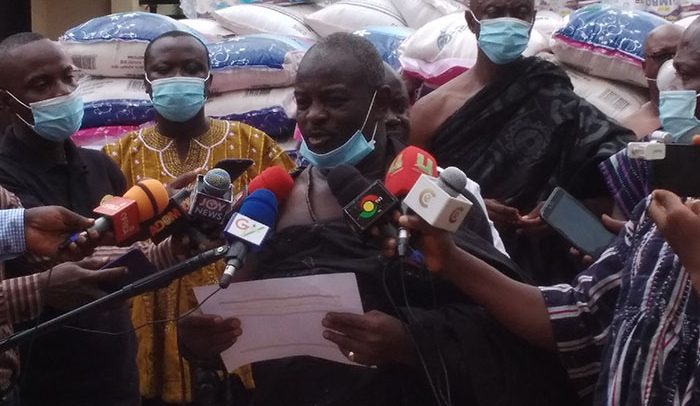 A representative of Okyenhene speaking to the media

THE Okyenhene, Osagyefuo Amoatia Ofori – Panin, head of the Akyem-Abuakwa Traditional Council in the Eastern Region has donated a sum of GH¢100,000 to support the fight against the spread of the novel Coronavirus (Covid-19) in Ghana.

The amount is aimed at complimenting government’s effort in fighting the Covid-19 pandemic.

This was revealed when the Okyeman’s Executive Council of Chiefs led by Dasebre Ayimandu Kantamanto, the Chief of Akyem – Kwabeng and Gyasehene of Akyem Abuakwa Traditional, donated some items to institutions in the Eastern Region.

He explained that because of the economic crisis that has been created by the viral infection, he (Okyenhene) has decided to donate items to communities in Akyem Abuakwa.

According to him, sustenance of people depended on donations in these difficult times and that the paramount chief is presenting the food items to the various divisions within the kingdom for onward distributions to the 950 towns within Akyem Abuakwa in order to ease economic burden on the people.

He encouraged the people to wear facemasks as demonstrated by the Okyehene and also abide by all safety protocols to protect themselves from the pandemic.

Becca Out With Covid-19 Song ‘Overcome’