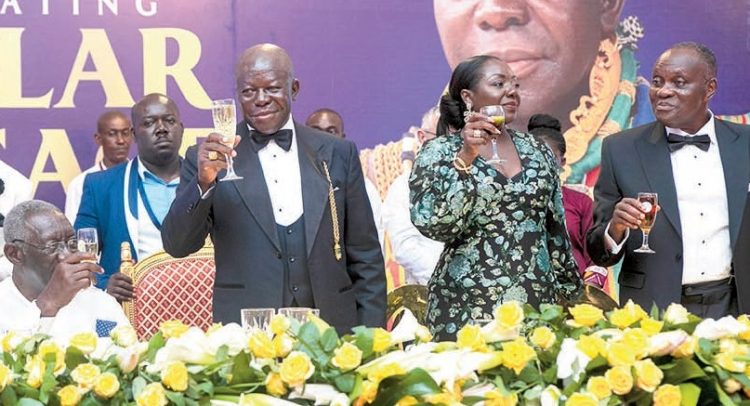 The Otumfuo Osei Tutu II, the 16th King of Asanteman, is the first recipient of the prestigious ‘Pillar of Peace Award’ instituted annually to honour outstanding leaders in Africa.

The outstanding award was presented to Otumfuo during the maiden Africa Premier Leadership Awards, which took place at the Manhyia Palace in Kumasi on the heels of the last Akwasidae festival for 2019, which fell on Sunday, December 29.

For over 16 years, the Asantehene dedicated his time, energy and resources to work to restore peace to the then troubled Dagbon Kingdom in the Northern Region of Ghana, which has led to the enskinment of Ya Na Abukari Mahama II.

The International Centre for the Promotion of Human Rights (CIPDH) and E ON 3 Group, a Ghanaian Business Solutions Provider in Accra, are the brains behind the Africa Premier Leadership Awards.

The Asantehene supported by his wife, Lady Julia Osei Tutu, former President John Agyekum Kufuor and Council of State Chairman, Nana Otuo Serebuo, the Juabenhene, received the award amid wild cheers and applause from the many well wishers who graced the occasion.

The award, which was in the form of a splendid citation, highlighted the numerous roles he played during his 20-year reign to help promote peace, unity and transformation in Ghana and Africa at large.

“Otumfuo your unparalleled skills in peaceful negotiations, arbitration and conflict resolution have resulted in the amicable resolution of that years-long chieftaincy crisis and brought peace to the Dagbon people of Ghana,” he said.

Prof. Dr. Tal Edgars also touched on how Otumfuo has restored dignity and respect to chieftaincy as an institution in Asante Kingdom, Ghana and Africa in general, urging Otumfuo to continue to be the pacesetter.

“Otumfuo, you have brought modernity and depth to traditional African leadership and re-awaken its relevance to the socioeconomic development of Africa and this has led to its acknowledgement and acceptance by the global leadership of our world,” he added.

Describing Otumfuo as indeed a pillar of peace, the citation also highlighted how Otumfuo used wisdom to resolve crisis on the campus of the Kwame Nkrumah University of Science and Technology (KNUST), where he is the chancellor.

“Otumfuo, having recognised these stellar achievements of yours over the past 20 years and in acknowledging and celebrating legendary and transformational leadership on the African continent, the African Premier Leadership Awards respectfully confers on you the prestigious award of the Pillar of Peace,” he said.

As part of the Asantehene’s package for winning the Pillar of Peace Award, plans are far advanced to issue 24-carat gold coins to commemorate the 20th anniversary of Otumfuo on the sacred Golden Stool.

The Bank of Ghana has already approved the issuance of the commemorative gold coins, which would weigh at least 31.104g and have a diameter of 37mm. It is expected to be officially introduced during Otumfuo’s 70th birthday on May 6, 2020.

The gold coins would bear the image of Otumfuo with ‘Adinkra’ symbols, which symbolise peace, harmony and reconciliation. The front and outer rings bear the image of the Golden Stool and an inscription ‘His Majesty, Otumfuo Osei Tutu II, Pillar of Peace’.

The backside of the coins would also bear ‘70th’ birthday and the image of the Golden Stool as the main image. The gold would be 100 per cent 24 carat fine gold.

Proceeds from the Gold Coins would be channelled into the establishment of a Cultural Resource Centre to promote the activities related to Traditional and Customary Conflict Resolution in Ghana.

The Asantehene, in his address after receiving the citation, said the combined knowledge and wisdom of the Nayiri, Naa Bohogu Abdulai Mahami and the Yagbonwura, Tuntumba Boresa Seleman Jakpa, helped to secure the Dagbon peace.

According to him, it is appropriate and in the right direction for Otumfuo to share the glory and honour that the Pillar of Peace Awards brings with the Nayiri and the Yagbonwura for their efforts in the Dagbon peace process.

Also, he commended political leadership religious leaders, civil society, the two Dagbon royal families and all others, that played significant roles to help restore total peace and unity in the Dagbon Kingdom.

The Asantehene, who was dressed in a black flashy suit, described 2019 as a memorable year in his 20-year reign, and he mentioned the peace of Dagbon and the resumption of operations of Anglogold Ashanti Obuasi Mine as some of his major achievements during the year.

He said he was ecstatic when the Ya Na Abukari Mahama II led a powerful delegation from Dagbon to officially thank him (Otumfuo) at Manhyia Palace for his pivotal roles in helping to restore peace in the Dagbon Kingdom recently.

He predicted that the 2020 general elections would be peaceful and so nobody should panic as he admonished political party leaders and their supporters to behave and campaign in a manner that would promote peace and unity.

Dr. Melida Harris Barrow, a motivational speaker and founder, Panama World Trade and Investment Foundation, who was the guest speaker, mentioned peace-building, sanitation, educational and health promotion as some of the major achievements of Otumfuo, so far.

According to her, it was time for Africans in the Diaspora to deepen their business ties with African countries such as Ghana so that the efforts of people like Otumfuo to develop the Africa continent would receive a massive boost.

Senator Myron D. Jackson, Vice-President of the Legislature of the US Virgin Islands, commended the Asantehene for his immense roles in helping to promote national peace and oneness among Africans, and urged him to sustain his good works.

Mr. Ras J. Baraka, Mayor, City of Newark-New Jersey, USA, said it was significant that the award to Otumfuo has coincided with the ‘Year of Return’ programme, noting that Otumfuo is a worthy recipient of the prestigious award.

The programme was graced by top dignitaries from Ghana, Africa and the world at large, including Minister of Trade and Industry, Mr. Alan Kyeremanten, Africans from the Diaspora, just to mention a few.

The programme was characterised by the singing of melodious local highlife songs by some high-profile Ghanaian musicians, who performed brilliantly. At a point, Otumfuo and his wife exhibited their dancing skills on the dancing floor.