Over 150 Houses Collapse In Ellembelle 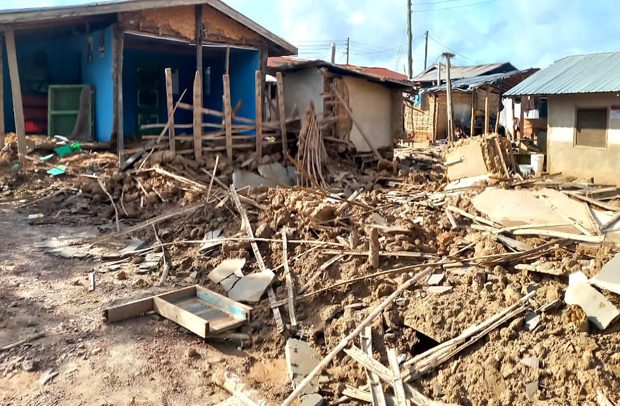 The ongoing heavy rains continue to cause panic and destruction in several parts of the Western Region.

However, the worst-hit area is the Ellembelle District where over 150 houses have collapsed as a result of the torrential rainfall.

The situation has led to the displacement of many of the residents who are mainly farmers.

The torrential rain which started on Tuesday has also destroyed several properties amounting to millions of Ghana cedis.

Most of the collapsed houses can be found at Nzema Akropong in the Ellembelle District.

A visit by DAILY GUIDE to the community revealed that the roofs of some schools and houses in the area have also been ripped off by the stormy rain.

Some of the people attributed the flood partly to illegal mining activities and people building on waterways, preventing the free flow of water when it rains.

The District Chief Executive, Kwasi Bonzoh described the situation as very worrying and said it is the third time the area is experiencing such a disaster.

He mentioned that the area where the people are living in is low-lying and so there was a need to relocate them.

He indicated that fortunately land has been given by the traditional authorities for the relocation project and called on the Central to support the assembly to develop the new area for the people to relocate.

According to the assemblyman of the area, Anthony Essien, the people are now willing to relocate to help prevent any future disaster.

He was grateful to the chiefs in the Ellembelle area who have given land for the people in his electoral area to relocate to a relatively safe place.