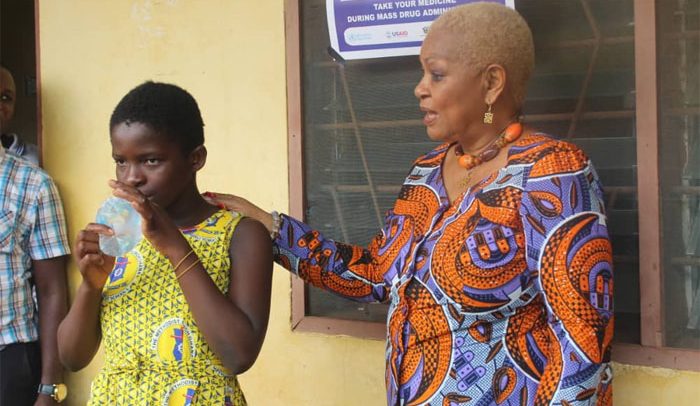 A student taking the medication as NTD Ambassador, Dr. Joyce Aryee encourages her.

Parents and guardians have been urged to support the ongoing mass deworming exercise which aims at protecting children of school going age against bilharzia and intestinal worm infestation which is endemic in Ghana.

The exercise being undertaken by the Neglected Tropical Diseases (NTDs) Programme of the Ghana Health Service (GHS) entails the administration of praziquantel and albendazole tablets to children.

About six million students from kindergarten to junior high schools in 205 districts are expected to be covered in the exercise which begun on Monday, 4th November 2019.

A visit to selected schools in the Eastern Region by NTD Ambassador, Dr. Joyce Aryee and regional health officers found that although the activity had taken off smoothly, some children were not participating because their parents were yet to give their consent.

At the Trinity Presby School in the New Juaben Municipal Assembly, some students refused to take the medication on the advice of their parents.

Hilda Ahenkorah, a teacher of the school said, “Some parents also called to complain that their wards experienced stomach upsets upon taking the medicines but we assured them that it was nothing to be scared of and as we speak, all of them are in school  and healthy.”

The team also visited the Nsukwao  M/ A Basic School, in the New Juaben Municipal and New Somanya Methodist Basic School in the Yilo Krobo District.

Dr. Aryee expressed satisfaction with the level of participation of the schools.

She nonetheless less expressed the need for increased public sensitization on the exercise “because this borders on health and the future of the country else, we will have our future generation down with illnesses which we could have prevented.”

NTD Programme Director for the Eastern Region, Christian Fiador noted the drop in bilhaxzia-cases in the region in the last five years, which to a large extent was due to yearly Mass Drug Administration.

He indicated that the deworming exercise will be conducted in all 26 districts in the region, with over 5000 schools and 75,000 pupils targeted.

“The drugs are very safe for the children and we have ensured that teachers and some nurses are well vexed in how to administer them but even in case of any adverse effect, we have asked that such students be taken by the health coordinators to see a doctor and treatment is free,” he stated.