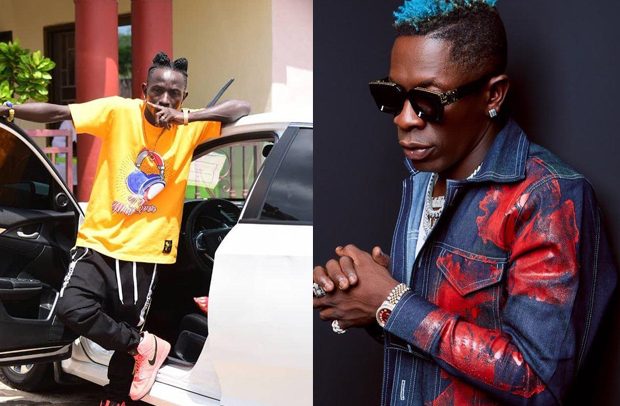 One-Corner hitmaker, Patapaa on Friday morning took top musicians Shatta Wale, Sarkodie and Amerado to the cleaners over claims that they disrespected him in their songs.
In an interview with Hitz fm, Patapaa, known Justice Amoa described it as awful verses by the three artistes in which he was mentioned.
According to him, Sarkodie in his 2018 ‘Meye Guy’ song took jabs at him by saying “had it not been God who has blessed him with money, Patapaa would have performed at his burial service.
He said he is not comfortable with that line and returned Sarkodie’s fire by calling him a “f**l”.
He also added that he hated him.
With Shatta Wale, he disclosed that when Shatta had his “beef” with Yaa Pono, he mentioned“ my name in one of his tracks saying he has stopped giving hype to underground artiste so if you need hype, go to Patapaa.”
In his response, Patapaa threw vulgar shots at Shatta and attacked his mother in the process.
However he was made to retract and apologize to the dancehall king by host Andy Dosty.
According to him, people like Sarkodie and Shatta attitude towards him gave other young artistes like Amerado the opportunity to attack him.
Amerado while replying rapper Obibini in their recent rap battle asked that the Zylofon music signee stay humble and not follow hype else he would become irrelevant like Patapaa’s music.
That verse forced Patapaa out of his hideout to respond thereby attacking Sarkodie and Shatta in addition.
Host of Hitz Fm morning show, Andy Dosty tried to restrain Patapaa from the insults at a point but it didn’t work out during a banter with Mr. Logic one of the panel on the Hitz fm Morning show.
Andy finally had to take Patapaa off air.
Hitz fm subsequently rendered an unqualified apology to its listeners for words used on the show by the interviewee.