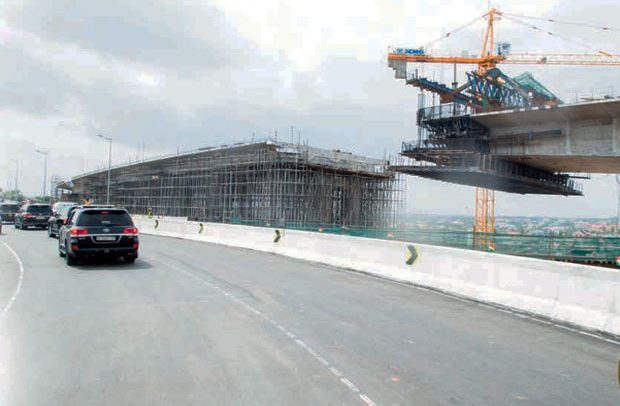 Phase 1 of the Pokuase Interchange

It is coming barely 24 hours after the President opened another Phase One at Obetsebi Lamptey roundabout at Kaneshie, Accra, which is supposed to be three-tier.

The Akufo-Addo-led NPP administration is currently constructing interchanges in Tema, Obetsebi Lamptey, Pokuase and Tamale, and all the projects put together cost$289 million.

The Pokuase Interchange, which is four-tier and will serve as the biggest interchange in West Africa when completed, is at a total cost of $65 million.

It was the NDC that negotiated the Pokuase Interchange in the Ga West Municipality and pegged the project cost at $84 million, and was supposed to be a three-tier edifice.

When the NDC lost power and the NPP took over, Roads Minister Kwasi Amoako-Atta, said President Akufo-Addo got his team to renegotiate the whole Pokuase project, and it was redesigned to become a four-tier interchange at the cost of $65 million, which is far lower than the $84 million the NDC government was supposed to pay for a three-tier if Mr. Mahama had won the 2016 election.

President Akufo-Addo yesterday opened to traffic the tier-three of the interchange, which is the road from Awoshie to Accra, as well as the road from Kumasi to Awoshie.

The project coordinator at the site told the President that other tiers of the interchange would be opened to motorists in the second week of December, adding that “at the end of March, we would have completed the entirety of the 4th tier.”

In addition to this, President Akufo-Addo was informed that some five kilometres of storm drains have been completed “to ensure we don’t have flooding in the downstream.”

As at December 2019, when the President last visited the site, some extra routes which had become necessary after a review of the works, including some 10 kilometres of local community roads, were being completed within the catchment area of the interchange.

The contractor, Zhongmei Engineering Group Ltd, told the President that four kilometres of asphalt dual carriageway had been completed for the Awoshie section of the project, with landscaping, street lighting, road signs and pedestrian facilities underway.

Also, a kilometre of asphalt single carriageway had been completed for the Kwabenya section of the project, with pedestrian facilities and retaining wall constructions been undertaken.

Earlier, President Akufo-Addo had visited the Ablekuma West Constituency which was carved out of Ablekuma South where Theresa Ameley Tagoe was NPP MP and honoured her with a statue at the Dansoman Roundabout.

During a short memorial service held at the roundabout for the Iron Lady, as she was affectionately called, President Akufo-Addo described her as “a colleague who was a valiant member of our struggle for freedom and democracy in Ghana.”

“Ameley Tagoe was a politician of the first rank; she founded the Women’s Wing of the NPP and she was a vibrant member of the New Patriotic Party right until her untimely death,” the President eulogized her alongside the incumbent MP and Minister of Communications, Ursula Owusu-Ekuful.

“She served President Kufuor’s government with zeal, enthusiasm and its all that we remember; we remember a woman who was determined to break through the ceiling and the glass barrier and made it clear that women had a strong contribution to make in the public life of our country as any man,” he noted, adding “we are being reminded by the ceremony of today that if you live a life of contribution, a life of participation, a life of assistance to your community your community will not forget you; and I am very happy that this is a woman that I have known since I was a young boy…we met at the University of Ghana very long time ago; so she always has a soft spot in my heart.

“This monument stands as testimony to the work that she did for our community, for our party and above all for our country; may she rest in perfect peace in the bosom of the almighty till the last day of the resurrection when we shall all meet again,” he said.