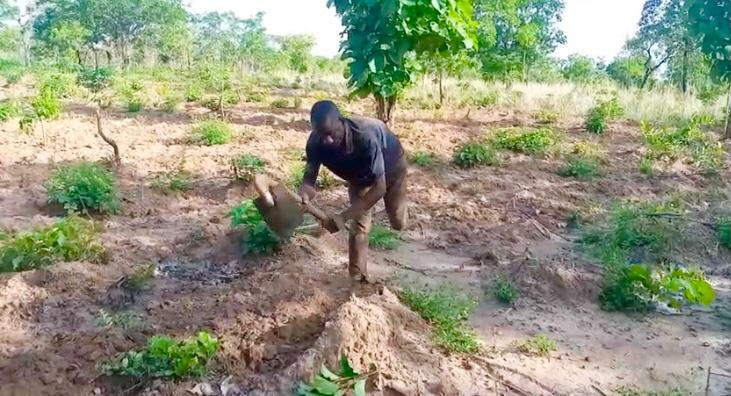 Kofi Manu, 27, a physically challenged man in Loloto, a farming community in the Kpandai District of the Northern Region has ventured into farming yam and groundnut as a means of survival.

The phrase ‘disability does not mean inability’ is what has motivated Kofi Manu to defy all odds to venture into farming in order to feed himself and his aged mother.

Kofi Manu was bitten by a snake at the age of 4 years which caused his left leg to be swollen and eventually developed into a sore and got rotten.

His family treated the sore with traditional methods due to lack of money to send him to the hospital.

His situation became worse and fortunately an NGO came to his rescue and sent him to the Tamale Teaching Hospital for medical care.

In an interview with DGN Online, Kofi Manu , tells me that doctors at the Tamale Teaching hospital told them that his leg had deteriorated and that they had to amputate his leg in 2019. 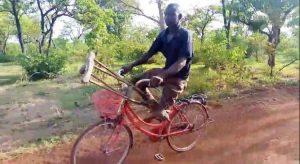 According to him, after his leg was amputated , life was difficult for him and since his mother was aged he decided to go into farming to cater for himself and the mother even though he is physically challenged.

“ Because I do not have anybody to support myself and my mother that is why I have decided to venture into farming so that we can survive.”

Kofi Manu rides an old bicycle with one leg for a journey of about 3km to his farm on daily basis.

He performance all the farming activities by crawling and sometimes used the crutches to aid himself on the farm.

“ I wish to continue the farming to gather money to enable me buy an artificial leg so that I can walk properly and do more work to cater for myself and my mother.” 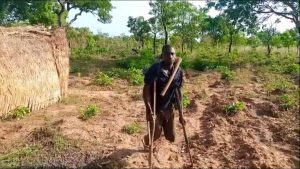 The physically challenged farmer appealed to the public , Philanthropists, NGOs to come to his aid and support him with sowing machine ,wheelchair , artificial leg , financial support to open a business that will go a long way to support him.

“ I cannot farm for a very long time due to my condition because I get weak easily and tired so I am pleading with anybody who can help me to come to my aid.”

The living conditions of persons with disability in Ghana has been very challenging.

Despite government’s initiatives such as the Livelihood Empowerment Against Poverty(LEAP) program, disabled persons such as Kofi Manu, continue to wallow in poverty while majority of them are not even aware of the disability fund, let alone access it.

Sustainable Development Goal 10 aims at reducing inequality within and among countries. This SDG calls for reducing inequalities in income as well as those based on age, sex, disability, race, ethnicity, origin, religion or economic or other status within a country.